Metaverse (Meta = Beyond, Verse = Universe), a world beyond this universe, is a term intimidating enough on its own. Metaverse will be a world of mixed reality, mixing real and digital, where we will have new technology to capture more data that has never been captured till now. It will give enough time for the experts to work on the privacy and security concerns it can generate. Most of the top companies like Microsoft and Apple are putting their hats in the ring, whereas Facebook sees it as the most critical piece to their business in coming times.

While we are addressing privacy issues on social media, Metaverse is anything but going to exacerbate those concerns. According to data collected by Hootsuite, 3.48 billion people are connected to some form of social media, which is forty-five per cent of the world’s population. Social media collects a huge amount of personal information, much more than what we think we are sharing. This data does not have much regulation from the government as of now, and any analytic into this data can get some precious insight into the personal information that is used to understand people and try and influence them based on this. Phishing attempts in 2021 have doubled since 2020, as per the APWG Phishing Activity Trends Report. Botnets, where the social media bots are some forms of automated accounts, the sole purpose will be to dig into the personal data and try and monetize these. Malware is the other form that people need to deal with. None of these issues are going to go away, and probably in the new proposed Metaverse, it will be anything but further multiply these concerns. 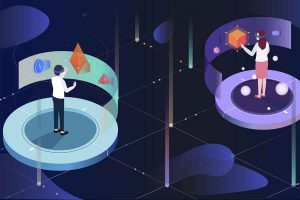 The Metaverse does exist in many forms, even in today’s world. The most compelling example is the game-like Fortnite. There are many other applications being put in by many small developers, but the new envisaged Metaverse by the likes of Facebook, Apple, and Microsoft is much different. They want Mixed Reality (MR), which is a hybrid of Augmented Reality (AR) and Virtual Reality (VR). People, objects, and the environment around them will all have a digital avatar in the Metaverse. The fine line between interaction in the real world and the virtual world is going to be breached. People acting in the real world will be repeated in the virtual world, and so too will the virtual world interaction result in action in the real world. Digital Twins are already a reality today in some of the applications where the factory floor and production are planned in the digital twin first, and once they are convinced of the right process, they are automatically followed on the real factory floor. This kind of merger and interaction will have a natural spill on the Metaverse.

The Hardware/Device Saga of the Metaverse

The new Metaverse will require new hardware and devices to collect a lot of new types of data previously uncollected. Most of the proponents of the Metaverse are proposing a new set of hardware. An eyepiece is a definitive one that will give the complete feel of the surroundings, but for this they will be collecting eye movement and head movement to start with. To make it a complete experience, they are also mostly going to collect facial reactions and hand movement data. This hardware will be capable of capturing fingerprints and Iris biometrics, which can turn the apple cart of privacy and security issues.

If you speak to any data scientist, they are going to tell you that any new dimension of data added in context to the ongoing data flow opens a huge possibility of new insight. These insights can give way to patterns, and these patterns can start predicting. The predictions can be granularized to each person in the Metaverse; what we were yet to handle in social media, now with more hardware and data captured, multiplies the problem in the Metaverse.

Unlike Apple, Facebook today has the app done through the App Store and Play Store, which also means they are bound by the privacy rules defined by Apple and Google. Facebook acquiring Oculus VR might result in independent hardware from the App Store and Play Store so that they can be independent of those privacy policies and define things as it suits them. The security and safety of these devices for the enormous data they will be handling and the physical security of the device will become critical.

With work from home becoming widespread, a mixed reality virtual office will become an attractive use case. People might have a virtual office space, and they will have a virtual laptop and other accessories, just as they would have in a normal office scenario. These environments will be very prone to security and privacy issues. Intrusions, snooping, impostors, and breaches can become the norm.

Integrating digital currency or even cryptocurrency seems inevitable. Most worrisome would be when the services like medical specialists will also be part of this world. There would be many cases of fictitious identities, etc. The list will just keep on increasing.

The new Metaverse is still some distance away, and as for its success and adaptability, the jury is still out. What we are sure of is that companies/developers are committed, use cases are compelling, and there is a good list of consumers who are ready to dive in. Security and privacy issues just cannot be wished away; they will need to be addressed in more ways than one.

Also Read: The Future of AI and Gadgets