Samsung has introduced Galaxy M53 5G, a successor of the Galaxy M52 5G in India. The latest addition to Samsung’s Galaxy M-series portfolio has arrived with dimensity 900 SoC, 108-megapixel camera.

A 108-megapixel quad rear camera setup, 5,000mAh battery, with support for 25W fast charging are other features of the Samsung Galaxy M53 5G.  The newly launched smartphone runs on Android 12 out of the box.

Samsung Galaxy M53 5G has been made available in two variants. The base6GB + 128GB storage model carries an initial price tag of Rs 23,999 while 8GB + 128GB variant is priced at Rs. 25,999, inclusive of an instant discount of Rs 2,500 instant discount for ICICI Bank credit card and EMI transactions. The Samsung Galaxy M53 5G will go on sale via Amazon, Samsung’s official website and retail channels at 12pm on April 29.

The Galaxy M53 5G will be available in two colour options Blue and Green. Samsung has also announced a Rs2,000 discount on the Galaxy M53 5G for select Galaxy M-series users.

Powered by an octa-core MediaTek Dimensity 900 SoC and paired with up to 8GB of RAM, the dual-SIM (Nano) Samsung Galaxy M53 5G runs on Android-12 based One UI 4.1. Samsung’s ‘RAM Plus’ feature that utilises up to 8GB of unused storage as virtual RAM.

For photos and videos, the Samsung Galaxy M53 5G is equipped with a quad rear camera setup comprised of a 108-megapixel primary camera, an 8-megapixel ultra-wide angle camera, and two 2-megapixel depth and macro cameras. There is a 32-megapixel front-facing camera for selfies and video calling.

The Samsung Galaxy M53 5G offers 128GB of inbuilt storage that is expandable (up to 1TB) via a microSD card slot. Connectivity options on the handset include 5G, 4G LTE, Wi-Fi, Bluetooth v5.2, GPS/ A-GPS and a USB Type-C port. 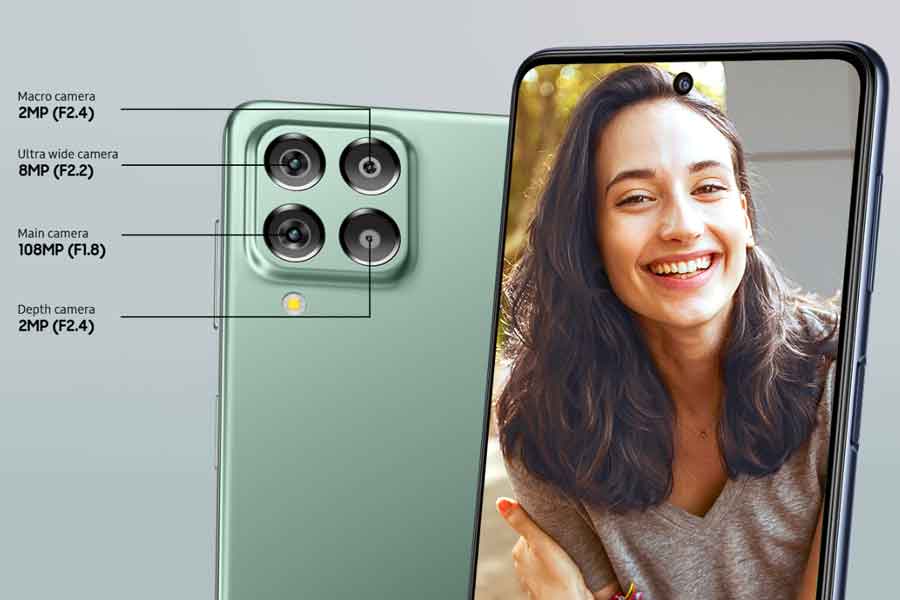 An accelerometer, gyroscope, geomagnetic sensor, light sensor, proximity sensor, and a fingerprint sensor for biometric authentication are offered in Samsung Galaxy M53 5G. The smartphone  measures 164.7×77.0x7.4mm and weighs 176g, according to the company.