Infinix Zero 8i Review: Worth Your Consideration

Transsion Group-owned Infinix, which mostly plays into the budget and entry-level segment, recently took the Indian market by surprise with the launch of a mid-range handset called Zero 8i. The smartphone packs in some interesting specs such as MediaTek Helio G90T processor, 8GB of RAM, 90Hz refresh rate for the display and 48MP quad-camera setup. Priced at Rs 15,999, the Infinix Zero 8i comes in Silver Diamond and Black Diamond colour variants. Let’s find out more about this device and see how it performs in a price segment that has a number of competitors such as Realme, Xiaomi, Oppo, Vivo and Samsung, to name a few.

The Silver Diamond colour variant that I had for review looks quite decent and appealing to the eyes, although the Infinix Zero 8i is a bit tall having a big display size of 6.85-inch which makes single-handed operation a little difficult. You need to adjust your hand or drag your fingers to reach the top of the screen, otherwise it may fall. However, the plus point is that it’s not a thick and weighty smartphone. Additionally, the Zero 8i has curved edges that make it comfortable to hold in your hand. There is a dual selfie camera setup embedded at the top left corner of the screen. Besides, you’ll find a selfie flash towards the top of the display, which is smartly concealed from sight. 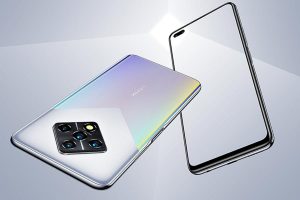 While the left side of the device features a SIM tray, Infinix has placed the fingerprint scanner on the power button on the right side which also sports the volume rocker. While the placement of the fingerprint scanner is convenient, volume buttons located right above it are not too suitable for use. There is nothing on the top of the frame, whereas at the bottom you’ll find a USB Type-C port, a 3.5mm audio jack and a speaker grille. On the rear side, there’s a diamond-shaped camera module at the center towards the top, which will definitely draw your attention. Since the camera module is somewhat raised, it causes the smartphone to rock when placed on a flat surface. The Silver Diamond colour scheme with a portion of the back sporting a matte finish makes this phone look quite elegant.

The smartphone offers a big 6.85-inch LCD panel with FHD+ (1,080×2,460) resolution. As discussed above, there’s a dual punch-hole at the top for housing the selfie shooters. The company has included a 90Hz panel with a touch sampling rate of 180Hz. Although Infinix claims to offer a 90.1 per cent screen-to-body ratio, it is more around the 86 per cent mark. The handset will offer you a very nice viewing experience with lively colours on display and sensibly good viewing angles. The refresh rate is variable between 60 and 90Hz and the only other display adjustments is a toggle for eye-care mode and adaptive brightness.

The Infinix Zero 8i is powered by MediaTek Helio G90T 64 bit octa-core processor with 12nm FinFET. Although it’s a bit obsolete, the G90T is definitely not a poor performer by any standard. It’s fairly better for normal day-to-day tasks which you can handle quickly. You’ll find no problem with multi-tasking, opening heavy apps, keeping multiple apps open in the background or browsing internet. Interestingly, the smartphone offers you 8GB of RAM and 128GB of internal storage which I feel is sufficient enough for a normal smartphone user. Infinix claims to offer a liquid cooling system which is said to help when the phone gets heated during graphical tasks. In terms of gaming, it’s not a bad phone. While the normal games like Subway Surfer or Temple Run are quite smooth on this device, heavy-duty games too, go well over here.

In terms of software, the smartphone runs XOS skin which is based on Android 10. The UI seems very familiar. There’s a Game Mode that disables automatic brightness and prevents the phone from switching between your data network and Wi-Fi to prevent issues. It also has a game anti-addiction feature that sends you a notification if you play for too long. There is a parental control setting as well which lets you lock any game after a set amount of time. You’ll find a number of bloatware that comes preinstalled on this device which is quite irritating. As for other features, the fingerprint scanner opens up the phone in an instant and face unlock works well in well-lit conditions.

In terms of performance, daylight shots taken with this smartphone were fairly better. The camera app has distortion correction enabled by default which is useful. Low-light shots were above average. For close-up shots, photos appeared good as is, but magnifying them revealed that the output isn’t very sharp. Portraits were good enough and had good edge detection. Selfies taken with the primary front camera had good detail. The wide-angle selfie camera offers a wider field of view but does not match the primary one in terms of quality. You can take selfie portraits as well. Low-light selfies were good and the selfie light does come in handy when shooting in weakly lit areas.

The phone carries a 4,500mAh battery backed by an ultra-Power Marathon technology that optimises the power used by the apps and thereby increases 25% battery backup. It comes with an 18W charger in the box with a 33W fast charge support that has the capability of charging the device from 0 to 70% within 30 mins. According to Infinix, the battery can sustain a video playback of 10 hours, up to 32 hours of music playback, 12 hours of web surfing, 49 hours of 4G talk-time and 25 days of standby time. The phone stands tall in this department. You can expect a full day of use from this device on normal to moderate usage.

The smartphone has got a decent design, a great display, and a smooth and capable processor, coupled with 8GB of RAM and last but not least, a heavy-duty battery along with fast charge support. Even the cameras are par excellence for photo enthusiasts. Taken as a whole, the smartphone should be worth your consideration. However, one thing that will disappoint you is the presence of preinstalled bloatware which are quite frustrating sometimes.