Reliance Jio announced a hike in prepaid tariff rates by 20 percent, which will be effective from December 1, 2021. The announcement comes after Bharti Airtel and Vodafone Idea hiked their rates earlier this month. With this, Jio has become the third telecom operator to increase its tariffs.

The Jio said that the tariff rates have been increased due to its commitment to further strengthen a sustainable telecom industry. “These plans will provide the best value in the industry. Upholding the Jio promise of providing the best-quality service at the lowest price globally, Jio customers will continue to be the biggest beneficiaries,” the company said in its press release.

With its announcement, the prepaid plans of Jio will cost 20 percent higher. The cheapest Rs 75 plan is now priced at Rs 91 per month, while the most expensive Rs 2,399 plan will be available at Rs 2,879.

From December 1, JioPhone subscribers’ entry-level plan of Rs 75 plan will now cost Rs 91, about 21% higher than previously. For its non-feature phone subscribers, the Rs 129 base plan will be raised to Rs 155. Also, eleven other tariff plans have seen increased rates. Besides, the telco has also included four add-on data packs.

Here’s a look at the revised plans: 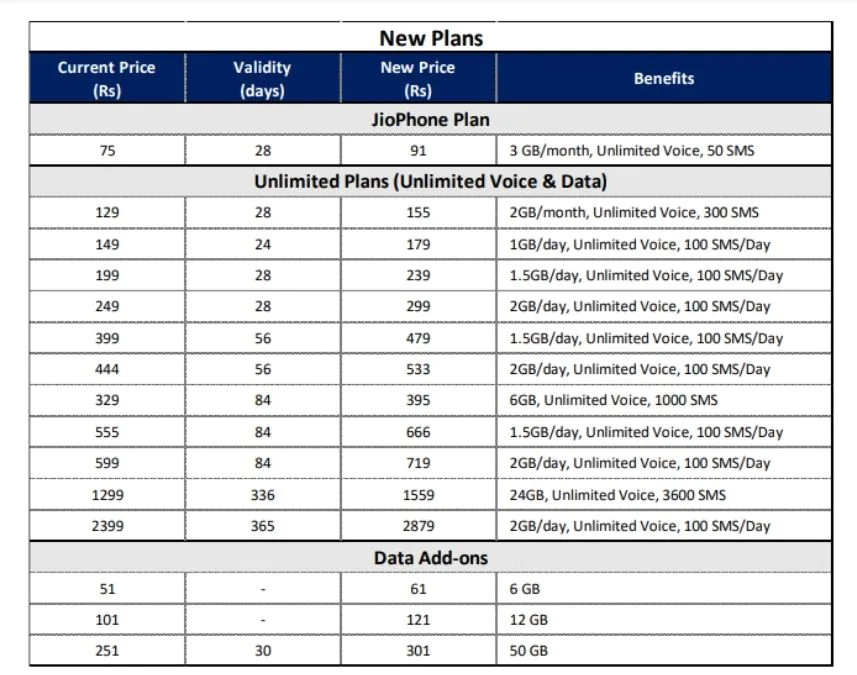