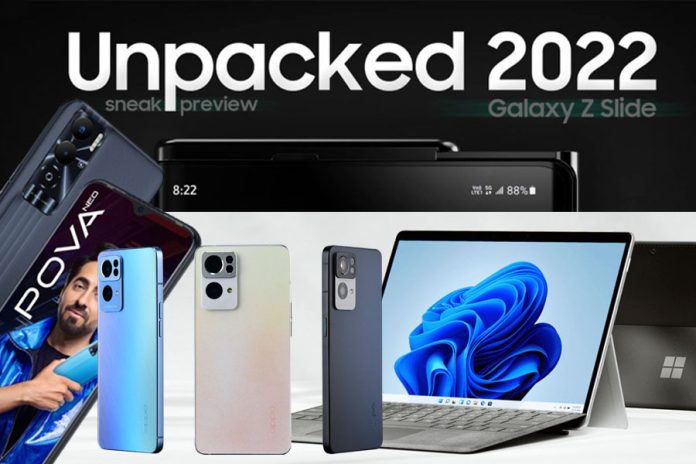 The popular sports gear brand Reebok has unveiled its first smartwatch ‘Reebok ActivFit 1.0’ in India. It comes with a 1.3-inch touchscreen display and a blood oxygen saturation (SpO2) monitor along with a heart-rate sensor. Reebok ActiveFit 1.0 offers more than 15 sports modes and is certified to be dust and water resistant with an IP67 rating. The first smartwatch by the brand claims to deliver a battery life of up to 15 days when in use and a standby time of up to 30 days. Offered in four color options — Black, Blue, Navy, and Red, the latest smartwatch is available exclusively on Amazon and is priced at Rs 4,499.

Samsung Galaxy Unpacked 2022 official date has leaked online. Tipster Evan Blass tweeted a promotional image of the upcoming Galaxy Unpacked event which reveals the date and time of the event. The poster is seen with the tagline ‘The Epic Standard’ with an event time of 3pm, but it is unclear what time zone it is referring to. As per the poster, Galaxy Unpacked 2022 will be hosted on February 9, where the South Korean tech giant will introduce the latest Galaxy S-series phones. The upcoming lineup is said to include three models — Samsung Galaxy S22, Galaxy S22+, and Galaxy S22 Ultra. The company has even started taking pre-orders for the devices in the US.

Sony has launched two new wireless neckband speakers – the SRS-NS7 and SRS-NB10 – in India. These speakers allow users to listen to music and take conference calls while walking freely. Both the SRS-NB10 and SRS-NS7 speakers offer a battery life of up to 20 and 12 hours respectively and are IPX4 splash resistant. As for the price, Sony SRS-NS7 is priced at Rs 22,990 while SRS-NB10 carries a price tag of Rs 11,990. The newly launched products will be available across all Sony Center, e-commerce portals, and major electronic stores across the country.

Redmi 10A, Redmi 10C tipped to launch in India soon

The Chinese brand appears to be preparing up to launch two new smartphones – the Redmi 10A and Redmi 10C – in India. The new mid-range smartphones from the house of Xiaomi are expected to be powered by MediaTek chipsets. They could come with triple rear cameras, including 50-megapixel primary sensors. The brand has tipped to release Redmi 10A and Redmi 10C in India, China, and other global markets. The smartphones could be priced under Rs 12,000 or $200 (roughly Rs 14,000), as per the reports.

Also Read: Micromax In Note 2 set to launch today: Here’s everything you want to know