The smartphone market in India started the year 2021 with a healthy 18% year-over-year (YoY) growth in the first quarter (January-March), totalling 38 million units, but declined by 14% from a strong 4Q20 (October-December), according to International Data Corporation, a market research firm.

While the vaccine roll-out program at the beginning of the year instilled positive sentiments, the onset of the second wave of COVID-19 infections towards the end of the quarter resulted in subdued consumer demand. Thus, the inventory cycle which had shrunk earlier in 2H20 started to get longer since mid-1Q21, IDC said.

“The April-June quarter is expected to face growth challenges under the weight of the second wave of infections. However, the high shipments from the first quarter should be able to suffice for the immediate demand. But IDC estimates the impact to be less pronounced compared with last year, with factories being operational today and only limited restrictions on logistics/transportation and state-level lockdowns instead of a nationwide lockdown,” said Navkendar Singh, Research Director, Client Devices and IPDS, IDC India.

“The recovery in 2021 might not be as smooth as expected earlier, with uncertainty around the lasting impact of the second wave and a possible third wave in next few months. IDC expects a rebound in consumer sentiments in the second half of 2021, resulting in a single-digit growth annually. However, the degree of growth will be restricted due to reduced discretionary spending, supply constraints, and anticipated price hikes in components in upcoming quarters,” he added.

Online channels continued their growth momentum ahead of the overall market at 25% YoY, despite a slip in its share to 46% quarter-over-quarter (QoQ), while offline channels grew at 13% YoY. However, both the channels started to face higher channel inventory towards the second half of the quarter.

MediaTek-based smartphone shipments continued to lead for three consecutive quarters with a share of 52%, widening the gap with Qualcomm, which had a 35% share.

Almost 7% of overall shipments were 5G, leading to a 3% YoY increase in ASP to US$176. Further, the premium segment (US$500+), grew 143% YoY, with 71% of those based on 5G. Apple, Samsung and OnePlus continued to dominate in that space; the iPhone 11 and 12 together accounted for 28% of shipments; followed by the debut of the Galaxy S21 series and the OnePlus 9 series.

“IDC expects a boost in 5G shipments with more affordable options, stickiness through financing/trade-in programs and steeper discounts/cashback offers. Additionally, vendors continue to focus on India as a manufacturing hub, which can be seen in their efforts in locally sourcing more components, ongoing investments in R&D capabilities, and adding new surface-mounting lines to cater to the growing local demand as well as for exports from India,” said Upasana Joshi, Associate Research Manager, Client Devices, IDC India. 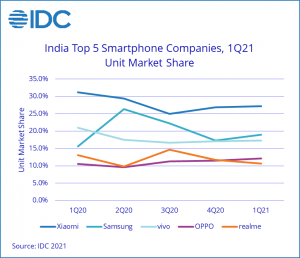 Xiaomi continued to lead, despite only posting 3% YoY growth. Three of the top 5 models nationally were the Redmi 9/9A/9 Power, accounting for 10% of the overall shipments. The Mi10i was the leading 5G model in 1Q21. Poco, Xiaomi’s sub-brand, continued to cement its online position, driven by affordable models like Poco C3 and M3. Also, the top 8 online models were from Xiaomi/Poco, with a 30% contribution.

Samsung retained its second spot, growing fastest amongst the top 5 vendors with 43% YoY growth in 1Q21. Online channels accounted for 41% of its shipments, growing by 55% YoY, while its offline channels continued to witness slower growth despite the new launches during March.

Vivo was at the third position, with shipments declining by 3% YoY. However, it continued to maintain its lead in the offline channel with a 29% share, ahead of Samsung. It regained its title sponsorship for the IPL cricket league, ensuring high decibel promotional activities around newly-launched models in March and April of 2021.

Oppo regained its fourth slot with shipment growth of 35% YoY in 1Q21. Its affordable A15 series featured in the highest shipped models nationally, along with newly launched 5G models accounting for 8% of Oppo’s shipments.

Realme slipped to the fifth slot after falling 4% YoY in 1Q21. It continued to be the third-largest online brand with a 16% share and more than two-thirds of its shipments going through the online channel. The company also launched the most affordable 5G model, the Narzo 30 Pro in 1Q21, expanding deeper into the 5G space.