Nokia has been very consistent in the last few years with its smartphone launches where the company has targeted specific price segments to reinstate itself as one of the best smartphone company. The company is marking its entry in the year 2021 with the launch of Nokia 5.4 which is the successor of the previously launched Nokia 5.3. In this review of ours, we will see what new the Nokia 5.4 possesses as a successor of Nokia 5.3. The new Nokia 5.4 comes under the mid-range price segment.

The new Nokia 5.4 looks just like the previously launched Nokia 5.3. The only major difference noticeable in the new Nokia 5.4 is the presence of a punch hole notch instead of a dewdrop notch which was present in Nokia 5.3. The stripe patterns at the backside of the phone are giving an aesthetic appeal to the looks of the phone. The bodyweight of the phone is light as the rear side has a polycarbonate body also the curvy edges of the phone are offering better grip.  Nokia is using the circular frame for the placement of rear camera sensors and next to the circular frame is lying a dual-LED flash. Nokia has used a physical fingerprint sensor in the new Nokia 5.4 which lies at the backside of the phone. The front fascia of the phone is dominated by the big screen with sleek bezels on its sides but at the bottom, the bezel is quite prominent where sits the logo of the company. The placement of buttons is the same as that of Nokia 5.3 where on the left side lies a Google Assistant button and a dual-SIM tray and a dedicated micro SD card slot and on the right side the power button and the volume rocker. The top of the phone holds a 3.5mm headphone jack, while the bottom is having a USB-C charging port and speaker grille.

It is very interesting to see that being the successor of Nokia 5.3 the new Nokia 5.4 comes with a smaller screen size. The new Nokia 5.4 comes with a 6.39 HD+ screen with an aspect ratio of 19:5:9 whereas the Nokia 5.3 had 6.55 inches screen. The new Nokia 5.4 is more compact and easy to handle due to its screen size meaning you can use it with one hand quite comfortably. The screen space offered by the Nokia 5.4 is very good and the aspect ratio of the screen offers wide angles allowing you to enjoy any games or movies to their fullest. The phone has a screen resolution of 720×1560 pixels. The visibility level of the display is quite good as you can view the contents even in bright daylight when the brightness level is set at maximum level. The colors produced on-screen very bright and punchy which adds up to your viewing experience when you are playing movies. 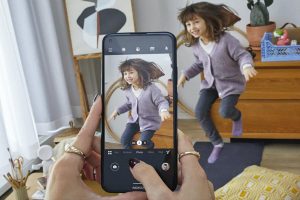 Nokia 5.4 comes with an Android 10 stock version and just like the Nokia 5.3 the new Nokia 5.4 is also Android 11 ready which means that it could be upgraded to Android 11 when the company will send out the Android 11 update for the phone.

The new Nokia 5.4 has Qualcomm Snapdragon 662 SoC processor with eight cores where four cores are clocked at 2.0 GHz Kryo 260 Gold and four cores are clocked at 1.8 GHz Kryo 260 Silver. The interesting point to take note of is that the previously launched Nokia 5.3 had Qualcomm Snapdragon 665 SoC processor. The new Nokia 5.4 was downgraded a bit in its processor section but it does not affect the functions of the phone ads we did not encounter any lag while multitasking. The games which we played ran in their top quality with good graphics level. Heavy games like Asphalt, COD ran smoothly with slight adjustments in their graphics level. The Adreno 610 GPU does a decent job in providing a good gaming experience. But looking at the current competitive scenario I would have preferred to see a more powerful processor like 720 or 725. I personally think that the processor is not something on which the company could bet to make Nokia 5.4 the top competitor in its price range.

The major difference between the Nokia 5.4 and 5.3 is that the new Nokia 5.4 has 48MP primary lens whereas the Nokia 5.3 has a 13 MP primary sensor. Nokia has just upped its photography level in the new Nokia 5.4. The 48MP primary rear sensor has an aperture of f/1.8 which is also the wide lens of the phone. The secondary sensor is a 5MP, 13mm ultrawide lens. The third sensor is a 2MP macro lens whereas the fourth sensor is a 2MP depth sensor. The images captured by the rear sensors were amazing as the images which we captured possessed utmost clarity with proper color balance and exposure level. The subjects captured reflected the original replication of the original world. The images captured of natural objects were sharp and detailed. The macro lens does a fantastic job of capturing every minute details with accurate color balance. The images captured of subjects at a far distance with resolution level increased highlighted some distortion in the quality of the images as there were some graining effects. The images captured at night were very good as well with proper color balance and clarity level. The rear sensor fills up the light around the subject/object which you want to capture making the image glow even in dim lighting conditions. The noise and graining effect is noticed only when you increase the resolution level to zoom in on objects which you are trying to capture. The new Nokia 5.4 has Cinema mode which allows you to show your creativity with the camera. There is an H-Log format and Watermark feature as well. The selfie sensor is 16MP with an aperture of f/2.0. The selfies captured were brilliant as they maintained a high level of clarity and color balance. The portrait mode does a fantastic job when you want to capture images just of yourself ignoring the background. The quality of the selfies drops a little bit in the dim lighting conditions.

The battery capacity of the new Nokia 5.4 remains the same as that of Nokia 5.3 which is 4,000mAh battery power. The battery power of the Nokia 5.4 can easily take you throughout the day with moderate use. The charger is also the same which we saw in Nokia 5.3 which is a 10W charger. The company could have used a new Fast charger to make the phone more appealing to the customers.

Overall, there are not many changes in the new Nokia 5.4 as being the successor of Nokia 5.3 which is quite disappointing to see in such a competitive space. The new Nokia 5.4 does offer a premium finish at the back which looks attractive. The display is usual, and does not offer variety. The quad-lens setup has some good photographic capabilities and thus the 5.4 qualifies as a good shooter. The 16MP selfie lens clicks decent pictures. The chipset is a daily driver. The battery is sufficient for a day as well under normal usage. The Nokia 5.4 sells at Rs 13,999 for 4GB/64GB variant, and that makes it a clean package among various skinned smartphones.

After helping the users with new recommendations with Play...
Read more
Phones

After staying in the rumour mill for some time,...
Read more
In-Focus

From being expenditure for a company to now being...
Read more
Gadgets

After helping the users with new recommendations with Play...

After staying in the rumour mill for some time,...

From being expenditure for a company to now being...