Infinix has expanded its popular Smart series with the launch of Smart 5 in India. The smartphone has some headlining features which you may call the category-firsts such as a 6,000mAh battery, a large 6.82-inch display and Helio G25 octa-core processor at the price of Rs 7,199. The Infinix Smart 5 comes in four colour options: Morandi Green, 7° Purple, Aegean Blue and Obsidian Black, and the one that I had for review is the Aegean Blue variant. Even though it looks interesting on the spec-sheet, let’s find out where it stands on different parameters of excellence.

The all-new Infinix device is bigger in size than most other smartphones in this price segment. It sports a 6.82-inch HD+ display with moderately thick bezels all around on the front, whereas the back is glossy, having a gem-cut texture design with a flow pattern which pops when light falls on it. There is a dual-camera module located at the top left on the rear which is designed in such a way that it looks like there are three lenses. The camera setup appreciatively is not protruded and sits nearly flush with the rear panel. The handset has a rear-mounted fingerprint scanner which is placed a little higher than usual. Performance-wise, the fingerprint sensor is accurate enabling the device to unlock swiftly.

While there is a SIM tray – housing two nano-SIM slots as well as a microSD card slot – on the left, you’ll find the power and volume buttons on the right side of the frame. The power button is suitably positioned, whereas you need to shuffle the phone in your hand to reach the volume buttons. On the bottom, the smartphone offers a micro-USB port, with a 3.5mm headphone jack and the primary microphone on either side. As usual, the company provides you a screen protector along with a plastic case and a 10W charger in the box.

The Infinix Smart 5 weighs 207g and is among the heaviest smartphones in its price range. This is something you’ll notice as soon as you pick it up. It’s weighty possibly due to the big 6,000mAh battery that it houses. Thankfully, it has curved edges that give you a better grip over the phone. 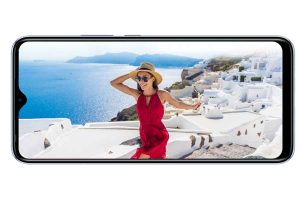 As mentioned above, the smartphone features a 6.82-inch HD+ cinematic drop notch display and a 90.66% screen-to-body ratio. The display comes with an aspect ratio of 20.5:9 which makes it an outstanding device for enjoying videos. It also has 440 nits of brightness and a 1500:1 contrast ratio. At the top of the display sits a selfie camera in the dewdrop notch, along with a big earpiece just above it. The Smart 5 houses a selfie flash that is hidden in between the display and the frame. Overall, the display is quite decent indoors but a bit reflective in the open.

The Infinix Smart 5 is powered by the MediaTek Helio G25 octa-core processor, and it comes in only one configuration– 2GB of RAM and 32GB of storage which is expandable up to 256GB using the microSD card. It runs Android 10 with the brand’s custom XOS 7 UI on top, which is easy to use and you’ll not find any issue while using the phone. You can customize the UI your way with theme support.

There are some unwanted apps and games preinstalled on the phone that will irritate you a bit, however, you may disable them. Thankfully, the smartphone comes with a Game Mode which turns off auto-brightness and prevents the phone from switching between data and Wi-Fi while you are gaming.

If we look at its performance, the Helio G25 is capable of handling casual usage and definitely not ideal for heavy users. It’ll not satisfy you, if you are a gaming enthusiast willing to play heavy games. Besides, there is not a huge scope for multitasking owing to only 2GB of RAM in it. However, it’s a good device for watching videos, browsing the internet and using messaging and social apps. Anyway, what else can you expect at this price?

Connectivity options on the phone include Bluetooth 5, VoWiFi and dual 4G VoLTE. On the audio front, it has DTS Surround Sound in four modes which will enhance your viewing-listening experience. 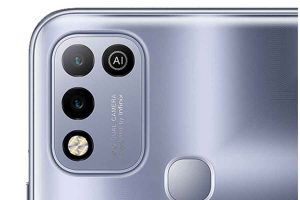 The handset offers a dual-camera setup, comprising a 13MP primary camera and depth sensor. On the front, it sports an 8MP camera and a selfie flash. The camera app is basic and user-friendly. The primary camera uses AI and is quite quick at detecting the scene. I clicked some nice daylight shots with this phone. Although it was a bit slow at times to lock focus on the object while shooting close-ups, the pictures came out well. On the other hand, low-light shots were not that good as they lacked sharpness and colour accuracy. Similarly, the selfies taken with the front camera were up to the mark in daylight but lacked the quality in the low-light. Likewise, the videos made via this phone were above average. The camera of Smart 5 also comes with a category-first mode like Slow Motion video recording feature that’ll allow you to capture and edit super slow-motion videos through the camera interface. 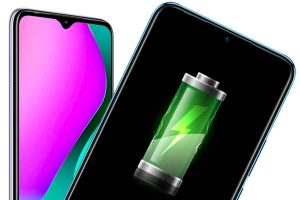 The smartphone houses a heavy-duty 6,000mAh battery, backed by an ultra-Power Marathon technology that optimises the power used by the apps and thereby increases battery backup by up to 25%. This keeps the smartphone operational even after long hours of heavy usage. Standing tall in this department, the battery delivered over 22 hours of video playback and nearly 14 hours of gaming. It took nearly three hours to charge the phone completely.

Although it’s a bit bulky and heavy, the smartphone scores big on display and battery at a budget price. While a big display means it’s good for watching videos and playing games, a big battery means you won’t have to charge the phone very frequently. Even the Helio G25 processor that it comes with is not bad; it’s fairly fine from the gaming point of view. One area where it slips massively is the 2GB RAM which definitely is not good from the performance perspective at the price point where you’ll find a number of alternatives in the market.