Infinix Hot 11S Review: A perfect all-rounder on a budget

Transsion group-owned Infinix seems to be following the footsteps of Xiaomi and Realme by launching back-to-back smartphones with good specs in the sub-11K segment. The recently-launched Hot 11S (along with Hot 11) with MediaTek Helio G88 chipset, 50MP primary camera and 5,000mAh battery, shows how serious the brand Infinix is with its enticing features at Rs 10,999. The smartphone comes in 7 Degrees Purple, Green Wave and Polar Black colour options, and we had the middle one for test. Let’s see where this handset stands on different parameters of excellence in this review.

Keeping up with the trend of offering good-looking phones, Infinix has worked in this department, this time too. The all-new Hot 11S is a bit different from its predecessors and looks decent in your hands, though it’s a bit heavy and you’ll have to struggle to operate it with a single hand. It’s made up of a plastic body with a glossy back panel, having a fingerprint-resistant coating which is not a new thing on the Infinix phone. The new wavy gradient pattern makes it look distinctive.

The back panel sports an AI triple rear camera set up with a huge circular main camera that does make this phone stand out from the crowd. The camera module doesn’t protrude out of the body too much. There’s a fingerprint sensor in the middle of the back near the camera module and an Infinix branding at the left towards the bottom. Up front, there is a punch-hole display with slim bezels around.

There is a sim card tray on the left side of the device, whereas on the right you get the volume rocker and power button. While the top of the phone is basic, there is a 3.5 mm audio jack, a Type-C charging port and a speaker grille at the bottom of the device.

Overall, the smartphone offers an apt weight distribution and a narrow frame that provides an easy grip in your hands, although it is by no means a one-hand device. The smudge-free back panel is definitely a good thing over here, as a budget smartphone rarely provides such a panel. 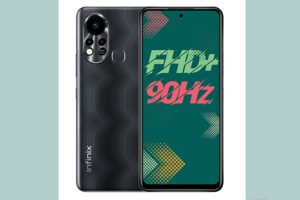 The smartphone offers a 6.78-inch full-HD+ (1,080×2,480 pixels) LTPS LCD display with a 90Hz refresh rate, a 180Hz touch sampling rate, a 20.5:9 aspect ratio, a 90.5% screen-to-body ratio and NEG Dinorex T2X-1 glass protection. As mentioned above, it comes with a punch hole (housing the selfie camera) and is surrounded by slim bezel which is a bit thick at the chin. The display has 500 nits brightness that offers crystal-clear images and good viewing angles.

Taken as a whole, the display provides decent brightness in the sunlight and is good for gamers as well as watching movies and other video content.

The newly-launched Hot 11S is powered by MediaTek G88 SoC, which is also present in Xiaomi Redmi 10 Prime, launched earlier with a starting price of Rs 12,499. While the Redmi 10 Prime comes in two RAM/ROM configurations – 4GB/6GB and 64GB/128GB, the Infinix Hot 11S features simply 4GB of RAM and 64GB of storage which is expandable up to 256GB via microSD card. Coming to the software, the smartphone runs Android 11 based XOS 7.6 skin on top.

Also Read: Infinix Note 10 Review: Having potentials to take on heavyweights in the market

In terms of performance, it’s a good multitasking device, as there were no lags while playing high-end games and watching videos. High-end games like Call of Duty got downloaded in less than five minutes. Icing on the cake is Mediatek Hyper Engine 2.0 Game Boost Technology along with the Dar-Link Game Boost Technology that ensures high-speed gaming. However, there were some heating issues while using the phone uninterruptedly for more than an hour.

On the software front, the interface of the Hot 11S is not clear, as it comes with several third-party apps such as PhoneCloner, Hi Translate, Welife, WeZone, XClub, X Theme, XShare, Yo Party, Phone Master, Boomplay, Calcare, AHA Games, Beez, and Palm Store. However, you can remove them if there is no utility of these apps.

Thankfully, the handset comes with some useful modes such as WhatsApp, which provides data to only Whatsapp messenger and stops to others. Besides, there is game mode, screencast and more. If we talk about the audio, there is a little improvement, with the smartphone now using the earpiece as a secondary speaker, which is definitely not bad, as dual speakers with DTS surround sound makes some sense.

As for optics, the triple rear camera set up at the back sports a 50-megapixel primary sensor paired with an f/1.6 aperture lens, a 2-megapixel secondary sensor, and an AI-powered lens with a quad-LED flash. For selfies and video call, the smartphone features an 8-megapixel AI camera with a dual-LED flash on the front. 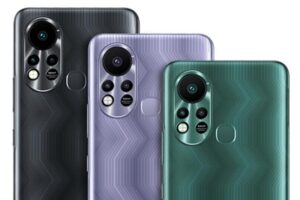 Interestingly, this is the first Infinix smartphone to house a 50-megapixel rear camera. If we look at the competition in the market, 50MP primary lens is also seen on the Redmi 10 Prime (starts at Rs 12,499) and Realme 8i (at Rs 13,999) which are priced higher than the Infinix Hot 11S.

The rear camera is simply amazing, in terms of performance. Shots taken during the daytime are sharp and full of details and displays punchy colours that are perfect for social media posts. Although exposure calibration is not very good in low-light conditions, you’ll get decent images at night with the Super night mode which takes little time in post-processing.

The 8MP selfie shooter on the front is satisfactory. It produces decent looking photos in the well-lit conditions, however struggles a bit in the low-light conditions as the images lack details. Although the dedicated LED flash up front does its job well, Infinix should have worked more on the front camera.

Having a mammoth 5,000mAh battery is simply not a USP of this device but also performance-oriented. It comes with a Type-C 18W charger and takes nearly one hour to charge completely. The battery goes on for two days with normal usage, whereas it exhausts in 24 hours on heavy usage. Appreciatively, the smartphone also comes with Ultra Power and Power Boost features that are designed to save battery. It automatically disconnects power after 100 per cent of charging, which is a nice addition.

The Infinix Hot 11S flaunts a robust design, looks nice, offers smooth performance and has decent cameras and battery life. Having a 50MP primary sensor makes it stand out from the crowd. On the flipside, it has a more cluttered UI and hence, the software experience does leave a bit to be looked-for. Although it has a tough competition to face with Redmi 10 Prime and Realme 8i, the Infinix Hot 11S justifies its price with features that consumers wildly look for in the given segment.

Xtracover is an e-commerce platform that offers a variety...
Read more
Reviews

Infinix Hot 11 2022 Review: A decent choice in the budget-segment

Users from Tier II and III towns are expected...