Infinix Hot 11 2022 Review: A decent choice in the budget-segment

Infinix has done an excellent job, making its name in the budget segment in India. It has some amazing launches coming year after year and they’re not hard on your pocket as well. For example, last year it had the Hot 11 2021 ranging in the budget category. The device is so much popular on Flipkart with 8k 5-star ratings. This also says that users are not only buying the smartphone, but they’re also liking it as well. So, joining the queue, it has launched its latest smartphone adding to the Hot Series line up: Infinix Hot 11 2022. The introductory price for this one was 8,999 at Flipkart, so let’s review what features and specifications it has to offer. We’ll also see how this one performed differently and what makes it worth considering.

What’s inside the box?

First of all, it comes in an interesting green coloured box which looks super cool by the way. Inside the box, you get the shiny smartphone on top covered with a sheet wrap. Removing the phone, you will see other things like the 10W compact charger. A Type-C USB cable along with the SIM card tool. You will also get the other documentation like the warranty card, and user manual inside. It comes with a clear phone case with a very decent built quality. I was also hoping for the scratch as we do get one generally with Infinix, but overall, it has everything.

Starting with the design, Infinix Hot 11 2022 features a very straightforward look that feels well-made in hand. Like many other budget smartphones, it also sports a plastic unibody construction with a glossy surface on the rear. This looks really cool and is very glossy, adding to the phone’s slickness. Although this glossy back does also work as a fingerprint magnet, you can always avoid it with the cover that comes with the smartphone.  One more good thing that I like about the design is that it has flat sides. This helps in maintaining a better grip even on extremely small hands like mine. The flat edges also add the new year flavour making it look more modern and trendy. The camera module on the phone is squarish in design and it also protects it from wobbling while laying flat on a surface. 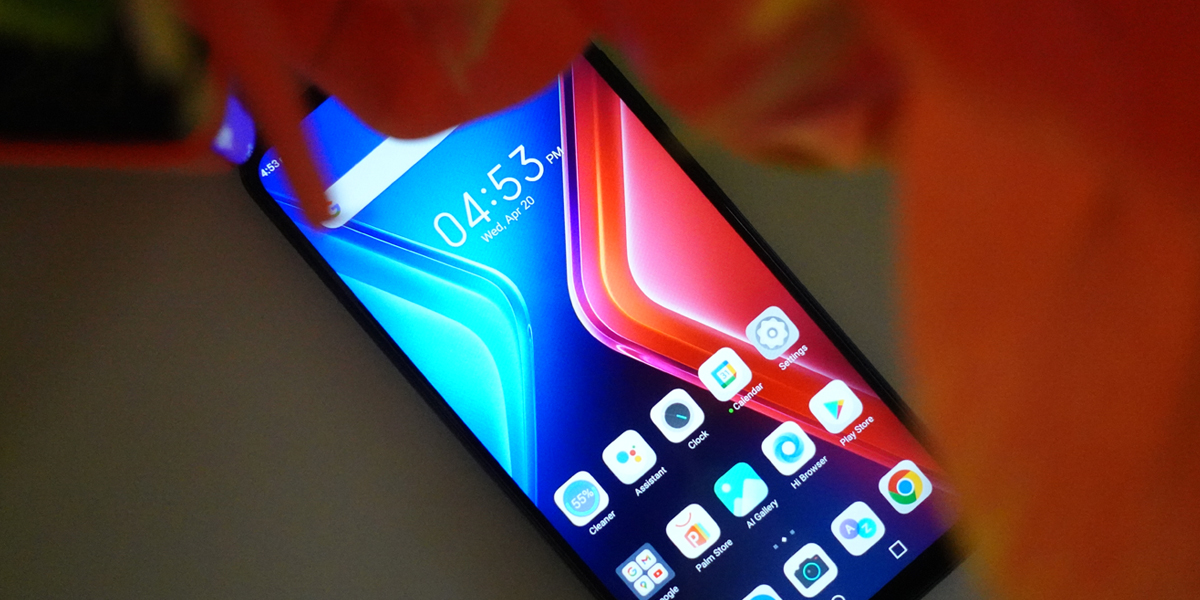 Other specs in the design include a 3.5mm jack at the top. It features the SIM card tray at the top corner on the left side. It sports a hybrid SIM card slot. SO either you can use your Nano-SIM and an SD card or you can use both your Nano-SIM. The right-hand power button also serves as a fingerprint sensor, which recognises and unlocks the smartphone quickly and accurately. The phone weighs somewhere around 198 gramme to 199 grammes which is pretty decent to handle.

The Infinix Hot 11 2022 features a massive 6.67-inch Full HD+ display on the front paired with a 60Hz refresh rate. The LCD panel comes with a Panda King glass layer on top, 550 nits of brightness, and a 114 per cent sRGB colour gamut. It also sports an 89.2% screen to body ratio. The screen is pretty good enough to provide realistic colours and good viewing angles, though, the light is insufficient. For pleasant viewing, I have to keep it close to a maximum almost most of the time. Additionally, and as a reading experience, it doesn’t give the best outdoor reading experience, but it was pretty decent. The viewing angles are likewise very standard.

Coming to the video streaming it performed very generically. Since the smartphone is WideVine L3 certified, HD streaming via OTT sites such as Netflix, Hotstar, and others is not possible which was a little bummer. Also, it only supports content at 480p, which is a very okayish thing.

Talking about the performance, the Infinix Hot 11 2022 isn’t the most powerful smartphone in its class, but it’s also not a slacker. The gadget is equipped with a Unisoc T610 CPU, which is performed admirably with simple apps like texting and calling. There was also no heating issue when it is used moderately. Even the social scrolling works like butter but it did struggle with apps like BGMI throughout my testing. While playing BGMI with Balanced graphics settings and a Medium frame rate on the phone, there were some significant delays in the footsteps and other sounds. However, I can say it gives a decent gaming experience, especially in the budget range. 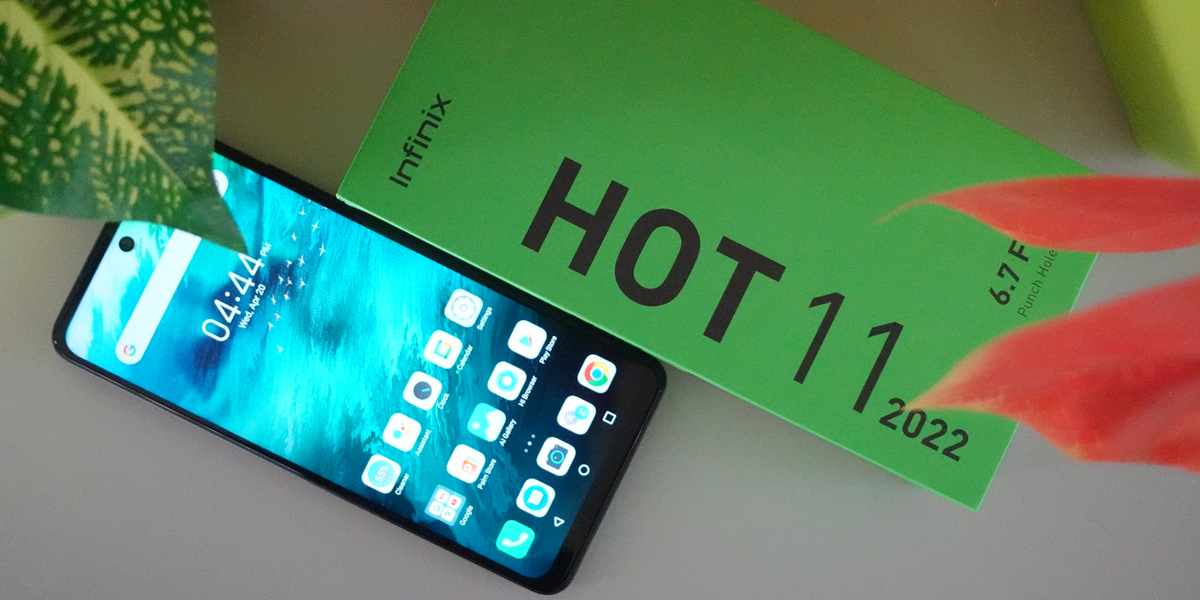 As far as the storage availability is concerned, the phone comes in only one configuration: 4GB of RAM and 64GB of storage. It also has a separate microSD card slot that allows for storage expansion up to 1TB. The gadget is powered by XOS 10.0 Lite, which is based on Android 11. The Lite version now lacks the same user interface as Infinix smartphones running the regular XOS. I was also a little disappointed with the RAM options as it could’ve offered some more options. Now I understand that this smartphone bears the tag of the budget range, but still, it could’ve been more.

The Lite version has the same notification shade and other UI components as Stock Android. It is, however, a significantly modified version with Infinix’s own characteristics. It also sports other features like Smart controls, Themes, XOS Lab, XOS launcher, and more. One unique feature that I’ve really enjoyed is the flip to mute function. It allows the users to mute an incoming call by just flipping the smartphone. This comes really handy when you’re not in the right mood to talk to anyone and also justifies your wish to flip the phone on every unnecessary phone call!

The XOS Launcher, on the other hand, isn’t the finest, as it’s not even close to Stock and includes advertisements. These can be disabled, however, they can obstruct the user experience with unnecessary alerts. Furthermore, there is a significant quantity of pre-installed and uninstallable bloatware. However, you can always fix some things with every new update. And interestingly, When I initially started the device, I also received the April security patch update.

This isn’t the greatest in this range in terms of performance, but it will give you a decent response. You can definitely work with this device if you’re not a heavy user like me. However, if you’re a gamer, then this won’t satisfy your arena expertise.

The Infinix Hot 11 2022 comes with a 5,000mAh battery that supports 10W charging. With moderate usage, I was able to reach the end of the day of screen-on time on the device. If you don’t have any high usage habits, it can easily last a day or perhaps two. A 10W charger and a USB-C cable are also included in the box. It takes about 1 hour 40 minutes to charge from 30 to 100 per cent, therefore charging from 0 to 100 per cent should take roughly 2.5 hours or even more. Furthermore, the handset ships with XOS, an Android 11-based operating system. The XOS custom skin is all nice and all, but it comes with advertising and programmes that you can’t remove.

Coming to the optics, Infinix Hot 11 2022 features a dual-camera system with a 13MP main sensor and a 2MP depth sensor on the rear. For selfies and video calls, there’s an 8MP camera on the front.

I would say the phone performs admirably in the daylight shoot. The colours appear brilliant in the relevant, but somewhere on the softer side. However, talking about the sharpness of the images, it has performed excellently! 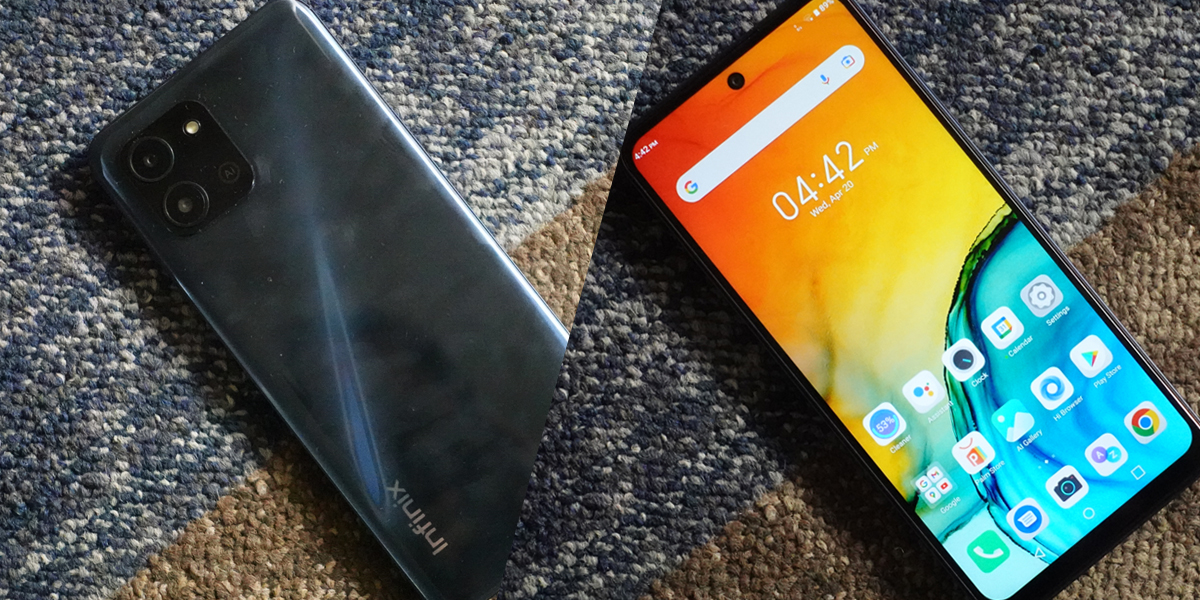 Talking about other features of the camera, it has a Pro mode, Slow motion, 1080p video recording, time-lapse, and panoramic mode. Infinix Hot 11 2022 also features portrait mode on the rear camera which is pretty amazing considering the price it has. However, the performance is pretty decent. Also, sometimes the depth sensor fails to provide an accurate shallow depth of field behind the subject and clicks some blurry images. On the brighter side, it works well with good edge detection.

Furthermore, low-light and artificial-light photographs are noisy and fuzzy. Although the camera immediately recognises the subject and the focus is also very accurate, the colours sometimes appear faded, and the details and sharpness are below average. The selfie camera on this one is also very basic and the click is average. Skin tones may have also been better.

There’s not much you can do with the camera in low-light situations. In fact, while you’re beneath the moon, you can’t take any kind of image that will appear decent. The images are completely fuzzy, with no discernible details or crispness. Furthermore, there is no night mode, so don’t expect things to improve.

The Infinix Hot 11 2022 is overall a decent choice, but a somewhere less powerful variant of the standard Infinix Hot 11. Instead of the MediaTek Helio G70 SoC, the device has a UniSoC T610 chipset, which is also similar to the Helio one. The multimedia viewing experience on the phone performs really well. The colours are also bright and accurate with great sharpness. The camera performance of Infinix Hot 11 2022 is pretty basic, however, the software does perform decent, given the budget price range.

So, if you are not a heavy-duty smartphone user, and want something basic you might like this phone. You will enjoy the long battery life and won’t get bored during long travelling hours as it does last for a very long time. However, the phone does need improvement in many areas.

Previous articleLexar on boards Gaurav Mathur as the Director of its Indian operations
Next articleXtracover cocks revenue of over INR 100 crore in FY2021-22; aims to acheive more in FY23