Rooter, an Indian game streaming platform, revealed today that it had purchased the media rights to all of Skyesports’ IPs for the next year, in one of the largest media rights agreements in esports history. Skyesports is South Asia’s largest esports tournament organiser, with competitions held under its own IPs.

All of Skyesports’ unique competitions will be televised exclusively on Rooter in the future. The events will be streamed in Hindi, English, Tamil, Bengali, Kannada, Malayalam, and Telugu, in keeping with Skyesports’ and Rooter’s goal of making esports and game streaming as accessible as possible. Viewers who tune in to Skyesports tournaments on Rooter will also be eligible for exclusive rewards. 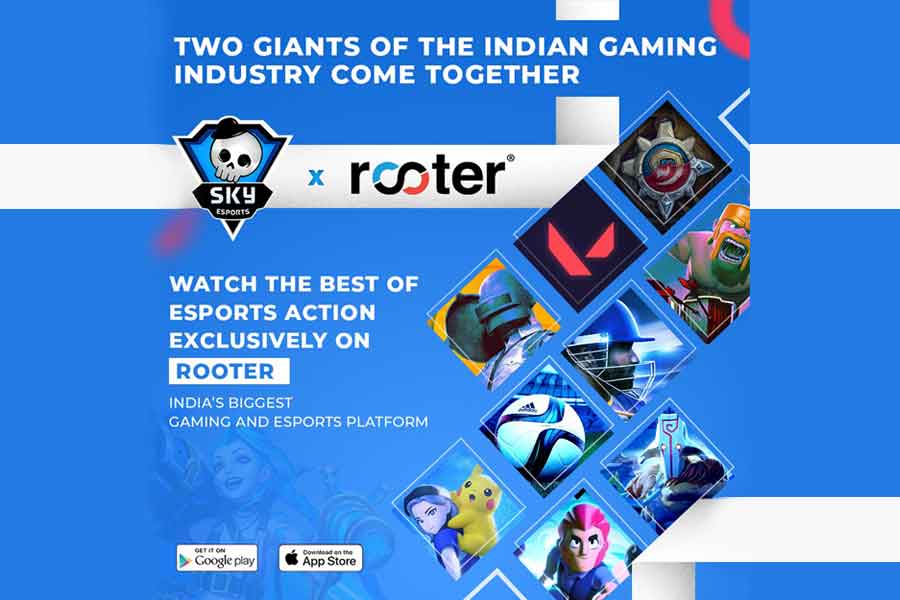 Rooter, dubbed the “Twitch of India,” already has a large user base in India, with over 35 million downloads on Google Play and Apple’s App Stores. By leveraging Skyespots’ massive audience base, the platform will be able to further delve into the esports market. Skyesports attracted more than 200 million viewers across all of its competitions last year, with the Skyesports Championship 3.0 BGMI Finals setting a new concurrent viewership record of 221,000.

Throughout the year, Rooter will produce new material based on Skyesports’ IPs to provide fans with more amusement.

Dipesh Agarwal, Co-Founder and COO, Rooter said, “Skyesports is renowned for hosting some of the major esports tournaments in the country. Teaming up with a platform redefining Indian esports, this comes as a landmark deal for both entities. Rooter is the fastest growing gaming platform in India and we will help Skyesports reach millions of fans who will get the best esports content exclusively on Rooter. We also look forward to working with Shiva and the rest of the team to provide multiple engagement opportunities for fans with esports teams on Rooter’s platform.”

Shiva Nandy, Founder and CEO, Skyesports said, “Our goal has always been to make Skyesports’ IPs, which have been homegrown in India, more accessible. I am sure that our esports content will feel right at home on Rooter’s platform. Additionally, by distributing the media rights, we are empowering Rooter to implement strategies to further engage our already large audience. We look forward to closely working with them throughout the year to enhance the watching experience for the viewers while building esports from the grassroots level and launching more premium IPs.”

Rajan Navani, Founder and CEO, JetSynthesys said, “With Skyesports, we envisioned the creation of a closely-knit esports ecosystem at the grassroots level. It’s a pleasure to have Rooter join us as a partner and we look forward to working together with them to be able to accelerate our growth in terms of viewership in India.”

In addition, the Skyesports League and the Skyesports Championship 4.0 will be held as LAN events, marking the company’s return to offline events after more than two years.

Previous articleiQOO 9 SE with Snapdragon 888 5G Processor to go on sale from March 8; price, specs and more
Next articleBest Portable Bluetooth Speakers to buy in 2022: Check out the list