Realme has come up with the latest edition in its S series smartwatches. It’s been a while since we’ve seen a new model in the S series watch after the Realme Watch S and Realme Watch S Pro were launched back in December 2020.
According to MySmartPrice sources, Realme is about to launch the S series watch, courtesy of tipster Mukul Sharma. He revealed that the upcoming smartwatch from Realme is the latest S100.

Now we have an idea that the watch is dropping soon, we can expect it to have a round dial, same as the other S variants- Realme Watch S and Realme Watch S Pro. 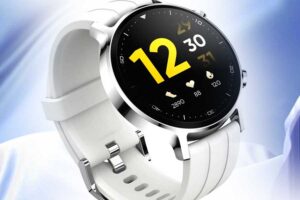 As Mukul Sharma’s mentions, the upcoming Realme Watch S100 will launch this month itself in the country. It’s also going to be available in two subtle yet classy colour options – Black and Grey.

A few months back, Realme launched the Watch T1 in the Chinese market. It also comes with a circular dial and offers a 1.3-inch touch screen AMOLED display with 416 x 416-pixel resolution. Furthermore, it comes with Corning Gorilla Glass protection.

The Realme Watch T1 packs a battery of 228mAh power and offers up to 7 days of battery life. It also has support for fast charging and lasts up to 3 days on just a 15 Minutes charge. The smartwatch also comes with 4GB onboard storage with NFC support. Additionally, it packs a Heart Rate sensor, Blood Oxygen sensor, GPS, and offers water-resistant with a 5ATM rating.

With such great features in the former options, we can definitely expect some amazing and distinct ones for the upcoming S100 watch as well.

Previous articleMIUI 13 India launch today: Here’s the list of Xiaomi phones getting new update
Next articleUnlimited WhatsApp backups on Google Drive may be a thing of the past: Details inside