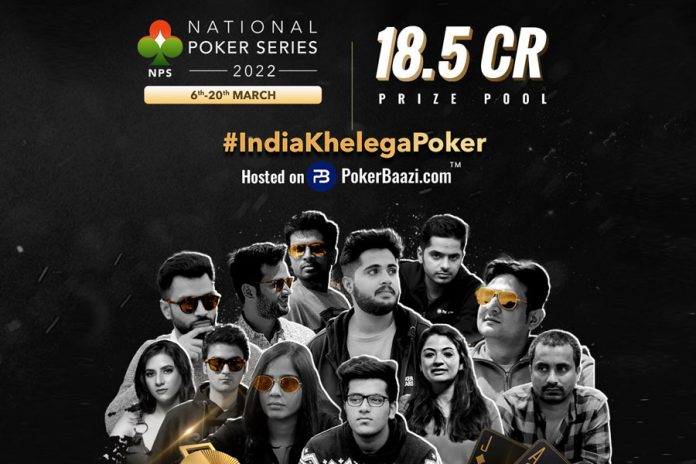 The country’s most notable poker series – National Poker Series India – is back with its 2nd edition in 2022. PokerBaazi.com, which is India’s biggest poker platform, will continue as the hosting partner for the NPS. The series, scheduled to begin from March 6, has announced a prize pool of 18.5 crores for 84 tournaments across 15 days.

With 252 medals on the line to be awarded to podium finishers in all 84 tournaments and three NPS Podium medals for the three finishers with the highest medal tallies, this year’s National Poker Series will yet again have Golden Rush as one of its marquee events.

Additionally, NPS Podium finishers will get to play the world’s biggest international poker event in Las Vegas, USA. The qualifier tournaments, also known as satellite tournaments, have already commenced from January 15 paving a path to play and win tickets to NPS events.

Navkiran Singh, the founder & CEO of Baazi Games (parent group of PokerBaazi.com), said, “We are proud to once again host the National Poker Series. After the huge success of its first season, which saw a record-breaking entry from across the demographics and geographies, we are all excited and set to welcome the new players with the launch of the second edition of NPS. This series is all about establishing poker as a sport in India while unveiling the hidden poker talent this country has to offer.” Last year saw players participating from 20 states with Maharashtra leading the medal tally with 44 medals followed by Delhi and Haryana with 37 and 18 medals, respectively.”

Taking the legacy forward, this year’s edition will see #IndiaKhelegaPoker as its theme, calling out the poker enthusiasts across the country to celebrate the game and fight for glory.

The tournament series offers both new and experienced poker players an equal chance to win gold, silver, and bronze medals, as well as the renowned title of national poker gold medalist. This one-of-a-kind digital gaming experience seeks to transform and uplift the poker ecosystem in terms of scale and talent in the online gaming sphere in India.

The first edition of the National Poker Series was hosted in June 2021 which experienced great success with over 83,000 entries across 64 tournaments. The 2022 edition will take it a notch higher with ‘India Khelega Poker’, making it an aspirational and seasonal event for players and fans to look forward to.