iQOO Z5 Review: Good at everything and superb in gaming

Although it’s bullish about its prospects to be a leader in the Rs 20K-30K price segment, iQOO is somewhat choosy with its launches in India. First, it was iQOO 7 series, then came iQOO Z3, and now it’s iQOO Z5. This time, it’s said to be very significant in terms of pricing – while the flagship iQOO 7 series (launched in April) sits at the upper limit, iQOO Z3 (unveiled in June) comes at the lower end of the price bracket. The all-new iQOO Z5 fits nicely between the two.

The recently-introduced iQOO Z5 smartphone costs Rs 23,990 for the 8GB+128GB variant, whereas its 12GB+256GB model is priced at Rs 26,990. The phone comes in two colour options – Arctic Dawn and Mystic Space – and is powered by Qualcomm Snapdragon 778G SoC, besides sporting a triple camera set-up and a massive battery that is enough for a day to keep you going. We had the upper variant in Arctic Dawn colour for review and here’s what we think about it.

The all-new iQOO Z5 sports a simple and sober design, and is very much reminiscent of the iQOO 7. Made up of a polycarbonate rear panel, it has a 3D curved back with a frosted texture and a matte finish, which is fingerprint-resistant. The smartphone features a punch-hole cut out, housing the front camera, at the top of the screen. There’s a slightly protruded rectangular camera module and iQOO branding underneath on the back panel. 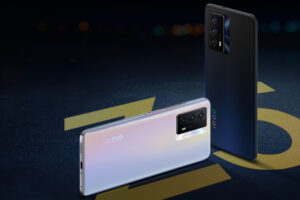 You get a headphone jack on the top, whereas the bottom of the device houses a SIM tray, a USB Type-C port and a speaker grille. While the left side of the smartphone is plain, on the right you get volume buttons and a power button that doubles up as a fingerprint sensor. These buttons are very much accessible with your thumb and you do not need to shuffle your fingers to hold this phone in your palm. It will not slip out of your hand.

The smartphone has a sleek frame that gels well with the frosted matte finish, which gives it a very decent look, notwithstanding the plastic body, which thankfully makes it lightweight too. The Arctic Dawn colour variant particularly looks so beautiful that you would like to avoid putting a case on this.

The iQOO Z5 ships with a 6.67-inch FHD+ IPS LCD display, skipping the superior AMOLED trend in the given price range. There are thin bezels around with exception at the chin, although it doesn’t look bad. Thankfully, the display has a high 120Hz refresh rate and a 240Hz touch sampling rate. Besides, it comes with Widevine L1 certification for streaming HD content on OTT platforms as well as HDR10 support.

The display is bright and well-tuned even under direct sunlight. What’s more, you also get Eye Protection with the TuV Rheinland certification. There are variable refresh rate modes that you can set to 60Hz, 90Hz or 120HZ, or use a smart auto-switch option that will dynamically change refresh rate based on your usage. Despite lacking the high contrast look, there’s plenty to love about this display, which is good enough to enjoy gaming, binge watching, browsing social media, etc. 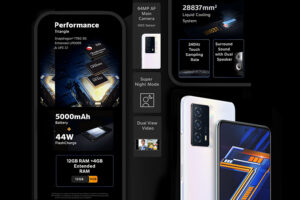 The smartphone is powered by Qualcomm Snapdragon 778G SoC. Although it’s not a flagship chipset, it’s fairly best in the segment. The one that I reviewed had 12GB of LPDDR5 RAM and 256GB of UFS 3.1 storage. The smartphone will not disappoint you in terms of performance, as it flies through day-to-day tasks, multiple apps as well as graphic-intensive games. The chipset managed a single-core score of 807 points and a multi-core score of 3009 points in our Geekbench 5 test.

Although I’m not much into it, gaming is so smooth that you’ll hardly experience any hiccups on this phone. The handset, however, gets somewhat warm during extended sessions, but not hot enough to cause any issue. The iQOO Z5 also comes with Extended RAM 2.0 that allows you to use 4GB of the storage as RAM, which is like cherry on the cake, to further help performance. The smartphone also features a liquid cooling system that is said to reduce the surface temperature of the mobile phone by about 3°C and the CPU junction temperature by about 12°C for CPU-intensive games.

In terms of software, the device runs Android 11-based Funtouch OS 12, which comes with a lot of customisations along with a dedicated game bar (Game Space) that can be accessed by swiping right during a game. Besides, it brings several modes for gaming, including a high-performance mode, battery saving mode, and more. While it’s a very refined software offering a neat interface and sober menu layouts, it also comes preloaded with bloatware – a few iQOO apps and some third-party apps that can be uninstalled. The software experience on this phone was amazingly good though.

The all-new iQOO smartphone houses a triple-camera setup on the back with a 64MP, f/1.8 aperture primary sensor, an 8MP, f/2.2 ultrawide shooter and a 2MP macro lens. On the front, you get a 16MP camera for video calls and selfies. While the main camera can capture 4K and 1080p video at 60fps, the front camera is limited to 1080p recording at 30fps. 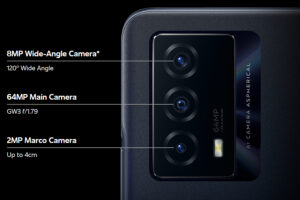 Talking about their performance, you get good photos in daylight with plenty of detail and vivid colours, however it’s not so in the lowlight conditions. Capturing pictures is also fairly quick. Even though the camera system doesn’t offer OIS (optical image stabilisation), the video performance is pretty decent. Macro shots and Night Mode worked better than expected.

The similar story goes on with the 16MP front camera, which does a superb job with selfies retaining good detail and natural looking skin tones. Overall, the smartphone offers a decent camera setup justifying its price.

The smartphone is backed by a massive 5,000mAh battery and comes with 44W fast charging support with an adapter included in the box. It can deliver over a day of battery life with heavy usage and can easily hit a day and a half with medium usage. The charger can fully power up the device in less than an hour. The battery performance was on par with expectations.

The iQOO Z5 is pretty decent in almost every department. It has got an impressive design, a nice display, a great processor, a wonderful camera setup and a reliable battery backup. It will not disappoint you in terms of performance and is built with gamers in mind, taking into account its many performance enhancements and buttery-smooth 120Hz display. On the flip side, the smartphone has a plastic build, an LCD screen and no storage expansion, but these things are insignificant to be pointed out. Taken as a whole, the all-new iQOO smartphone is good at everything and superb in gaming. The smartphone is a worthy consideration, if you are looking for a value proposition at the given price point.