Since the launch of 5G coming, brands have been battling aggressively to win over one another. You will find many new features and the quickest response with these next-gen devices. Joining the battle, Infinix also launched its contender in the market with its latest Infinix Zero 5G model. The device is the first 5G-enabled device coming straight from the brand. It has some  amazing features.

Infinix Zero 5G is a perfect mid-range smartphone, especially for the gaming lovers out there. It has the perfect blend of responsiveness and style featuring heavy performance at its best! I have the device for more than two weeks now and I have my thoughts ready about it. Let’s dive right into it together!

What’s Inside the box? 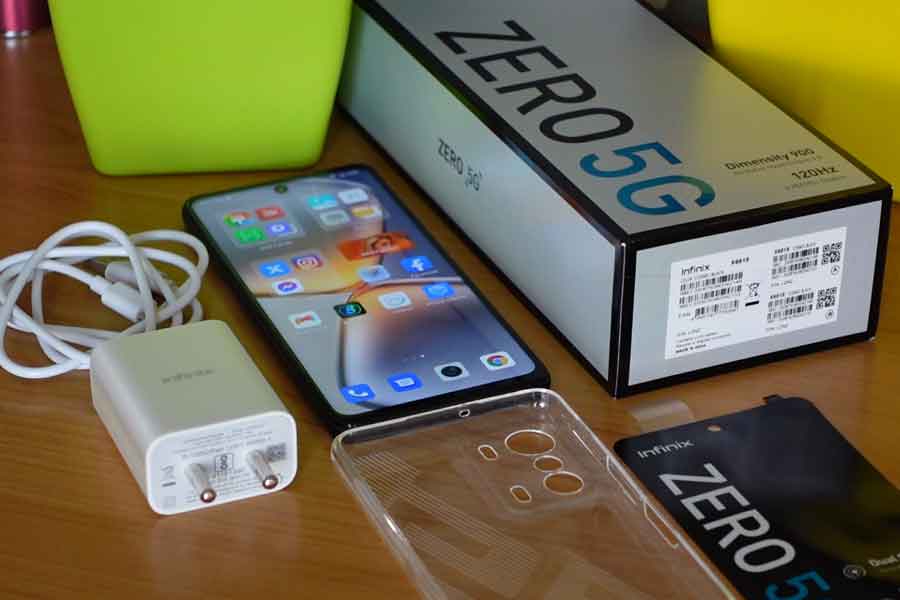 The device comes packed secured in an elongated box. Inside the big box, you get the phone with glossy and silky looks on top. Going in further you will find the 33W fast charger with a USB cable. It also contains a transparent back cover screaming 5G on the back. It makes it look more flashy and cool. You also get the sim ejector that is now have become the essence of any device! Anyways, I really liked how straight forwardly it was packed. It actually made an impression with the box itself!

The Infinix Zero 5G comes in two colour variants- Cosmic Black and the other one in Skylight Orange. The Black one is nothing but your regular classic colour with gloss surrounding it overall. The glossy finish makes it quite a fingerprint magnet though nothing beats the premium black. The other variant is in funky Orange, which is not something you would see in mid-range smartphones generally. A mid-ranger giving such cool vibes is something I really appreciate about it! Anyways, coming back to the design, the skylight orange comes with a leathered textured back, which is actually a vegan leather finish. Thus, with this textured pattern, the orange one gives a better grip than the black.

I have had the Black variant with me for over 2 weeks now. While I wasn’t a fan of how much of a smudge magnet it was, I still loved the minimalist style and, of course, the color!

The Infinix 5G is a stunning mid-range device bringing amazing design into the picture. The back of the phone has curvy ends with a super glossy finish. It also slopes upwards to meet the camera effortlessly. I have to say the design does deserve a full rating with such an intriguing pattern. The uni-curve design makes it quite a rare pattern after the Oppo Find X3. 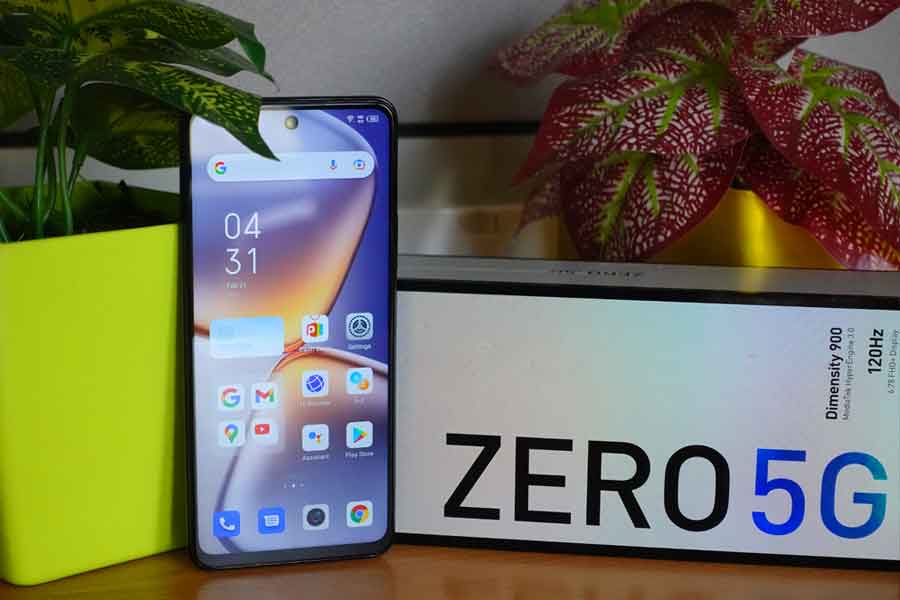 Now, an interesting fact I discovered about the phone! The shiny finish might look like glass to you, but it’s actually made of plastic. This is how much the premium vibes this device gives.

Furthermore, it has a side-mounted fingerprint scanner/lock button that works super smooth and is clicky enough. It has some instant quick response whenever you wake up or unlock the phone. Also, the volume rocker is right above the power lock in perfect alignment, which I really like! It is the perfect location where your thumb usually goes. It features the traditional headphone jack paired with a single bottom firing speakers.

Coming to the full body of the device, it has a massive size, yet it’s miraculously sleek and slim. It feels quite nice to hold the phone in one hand, though you might want to reach out for another one as well. So, if you’re not a fan of big phones you might not enjoy it that much. However, for me, this super sleek design paired with minimal and subtle looks seems promising. 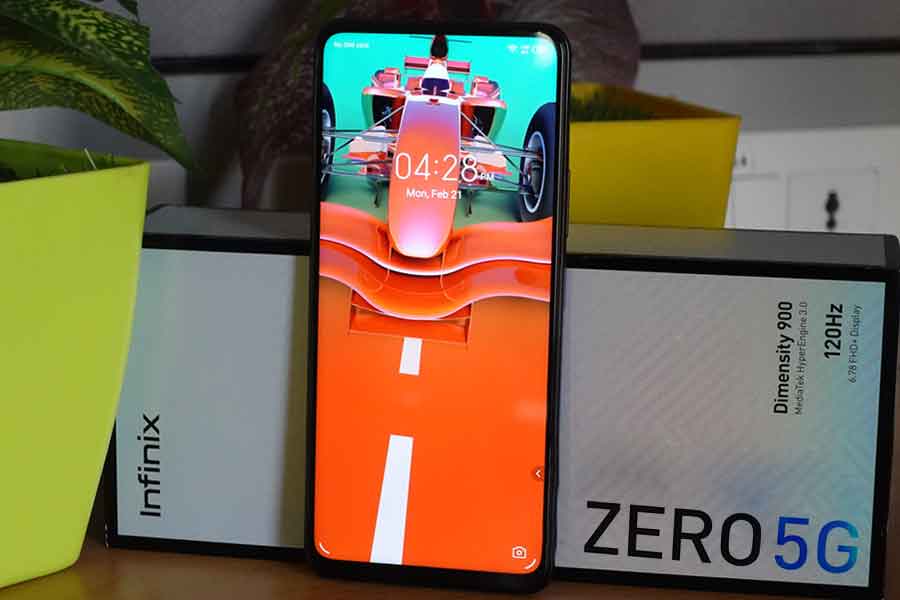 The Infinix Zero 5G comes with a massive screen size of 6.78 inches. It features an FHD+LTPS screen paired with a 120Hz refresh rate. It doesn’t feature the best screen quality, though, but is quite a performer. The LTPS display works great for improved resolutions and offers sharp image quality. Well, this is definitely something that helped me forget the contrast game with the AMOLED display. Also, the viewing angles work decent on this, and I have not discovered any darkening even at 90 degrees. The only bummer to me was the low brightness of the screen which was visible in the sunlight. Although, it offers 500 nits peak brightness which is much more than expected with a Mid-range smartphone.
Additionally, the screen is very responsive too. With 240 Hz touch sampling, you will experience it more while playing games!

Performance-wise, the Infinix Zero 5G is a strong contender. It features a MediaTek Dimensity 900 processor built on a six-nanometer process. Now you know why I used the term Strong contender! It offers both concrete and mid-range performance, outclassing the Helio G series. Also, with the 5G connectivity and support, running heavy games on Zero 5G is darn smooth and with minimal thermal throttling. 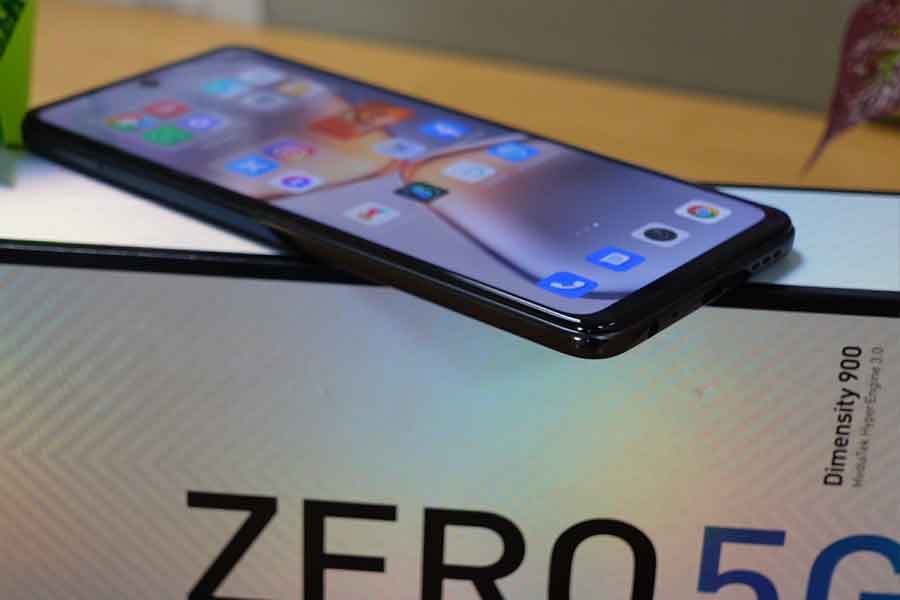 I’ve spent a good amount of time playing PUBG, COD (Call of Duty) and other highly demanded games. I used HDR ultra mode with a 60 FPS sustained period consistently. I have also tried Genshin Impact on Zero 5G, which is known to be the supremely high graphic game today. I neither faced any frame drops nor do I encounter any heating problems.
The visuals are extremely great while playing on Infinix Zero 5G, while the only thing it lacked was the flat audio experience. The sound was quite a bummer for me which is later amazingly covered by the party feature- Game Mode! It optimized my gaming experience to another level, with access to Social Turbo where I could read my messages, use apps like voice changer, sticker maker and so on.
Another interesting feature about the phone is that even though it offers 8GB RAM, which is sufficient for all the gaming lovers like me, it is further expandable to 5GB through virtual RAM. What? Yes, this is how I reacted when I saw the same! So, when Infinix claims that they do think beyond the infinite, they do! 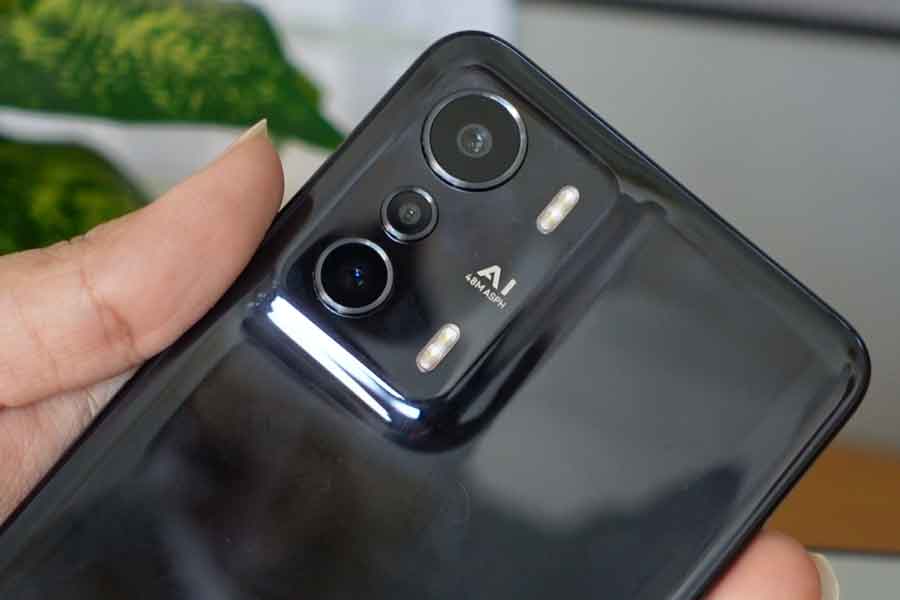 Coming to the camera specs for this stunner, Infinix Zero 5G features a triple camera array on the back. It has a primary shooter of 48MP followed by a 13MP portrait camera (with 2x optical zoom) and a 2MP depth sensor. Surprisingly, it also offers the bokeh mode, which is not so common in mid-range smartphones. Wow!
The 2x optical zoom has made the portrait shooter very sharp with consistent colour renditions. The primary camera on this one works fine and get the job done in perfect lighting. 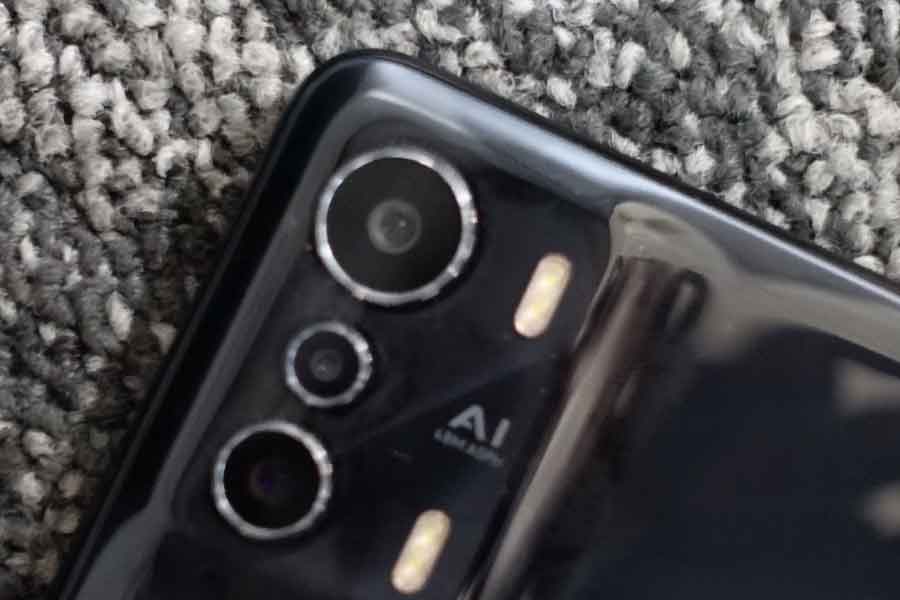 The camera is a star in the nighttime! Surprisingly, photos in low light were way too better, with the night-mode kicking in automatically in the dark. Also, it improves the dynamic range of the lens giving you the right sharpness. To improve things further in low light, you can also switch to the Super Night Mode. It helps in recovering shadows and highlights as well. Overall, I really enjoyed the pictures in the night. They were full of life!

On the front, it has a 16MP selfie camera. Overall, the selfie shooter is quite solid while taking pictures with on-point colours and details. The selfie shooter also works well at night, thanks to the dual led flash! Furthermore, it supports 4k 30FPS video recording, which is great considering this is a mid-range smartphone. Overall, the camera quality is decent and justified given this is a mid-range smartphone.

This sleek device packs a massive 5000mAh battery under the hood. The battery life is also quite long on Infinix Zero 5G. Even though I’ve used the phone moderately heavy, including playing games, watching videos, long voice calls, and video calls it easily lasted me 1.5 days on a single charge. So, even if you drain out, your phone life doesn’t! It comes with a 33W fast charging taking the smartphone 0 to 100% within 90-100 minutes.

Infinix Zero 5G comes with lots of customization options with some pre-installed apps for you! Also, one interesting feature I really liked is that how the notification toggle is divided into a separate notification center and on the other side a control center. The Home Screen also offers various customization options as well. You can choose different colors for your screen, set your own font, and animations as well. You can also arrange your applications into large folders and keep them on the home screen, on the front. 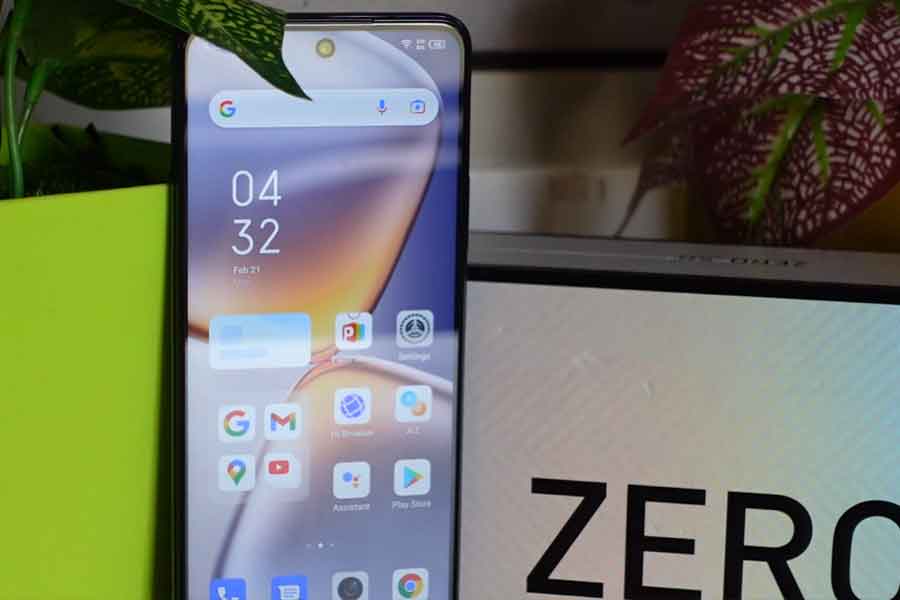 Infinix Zero 5G is an excellent deal with a strong performance, powerful specs, and a lost-lasting battery life. While the camera is not the best part, the responsiveness is quite fast and win the heart in a blink! The sleek design only adds the cherry to the cake. Therefore, if you’re a heavy gamer and prefer bingeing on your favourite series, this is undoubtedly the one for you!