Global smartphone shipments expected to contract 3% in 2022: Here’s why

The global shipments of total smartphone units in 2022 are expected to fall 3% YoY to 1.36 billion units, according to the latest findings from Counterpoint Research. Although shortages of several parts have not been resolved yet, the overall supply situation is expected to gradually improve in 2022 compared to the previous year, the study said.

On the macroeconomic front, expectations for recovery are now falling sharply and more concerns are spreading centered on China’s prolonged recession and the Ukraine crisis, it noted.

Counterpoint expects this year’s smartphone market to contract on the account of China’s zero-tolerance approach towards the latest COVID-19 resurgence, with lockdowns of cities and even entire regions, has been slowing down its economy, besides causing a chain reaction across the global economy due to the country’s closed factories and rising logistics costs. 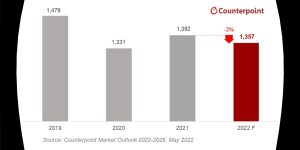 Besides, consumer sentiment, as per the study, has contracted significantly recently due to the spread of global economic uncertainty and surging inflation due to the prolonged Russia- Ukraine war.

The study further said that due to the US dollar strength amid rising US interest rates, emerging economies will also face capital flight and inflation.

Peter Richardson, Vice President at Counterpoint Research, said, “For the long term, we continue to expect a steady migration from feature phones to smartphones, and 3G/4G to 5G smartphones. As efforts to spread low- and mid-priced 5G devices continue, the global market for 5G devices is expected to show healthy growth and act as a significant driver of the overall smartphone market.”

“Operators are actively promoting 5G, and the incentives are sufficient in many markets to cause consumers to switch to the new technology. However, the recent global inflation trends are hitting the consumer demand and smartphone BoM costs, acting as a risk for the 2022 smartphone market,” said Richardson.

However, the outlook for a smartphone market recovery in the second half still stands, said Liz Lee, Senior Analyst at Counterpoint. “At the end of May, the Chinese government convened a meeting for large-scale economic stability countermeasures. The government is expected to implement more aggressive policies to stimulate the economy in the second half,” said Lee.

“Besides, we believe that new foldable smartphone launches, led by Samsung, will be able to stimulate demand in the premium segment,” added Lee.

Also Read: What Kids Were Looking For During Spring 2022?