Tripartite support – Training, wellbeing and financial aid will equip the athletes to bring laurels for the country in esports

The Olympic Council of Asia has announced the titles for the debut of esports as an official medal sport at the 19th Asian Games in Hangzhou, China in September 2022. There will be eight medal events, plus two demonstration games, reflecting the popularity and growth of electronic sports in Asia.

Tirth Mehta who won bronze medal in Asian Games 2018 in Esports Title – Hearthstone, said, “It brings me joy, not only because it is an amazing opportunity for esports athletes to bring a medal for India, but because it will increase the acceptance of esports as a proper career option for the mass. I am confident that this will provide a huge boost to the already-growing scene of Indian esports. After this inclusion, I am confident that government will recognise esports as a sport, and our athletes will gain the benefits any sports community and athletes would receive; be it training, wellbeing, financial support etc.”

Karan Manganani who gets placed 4th in Asian Games 2018 in Esports Title – Clash Royale, said, “Seeing esports being included in the Asian Games 2022 as an official medal event gives a sense of acceptance of this industry and scaling opportunities in the nation and worldwide. After this announcement, we hope that esports athletes will get their due recognition and support from our government and helping us in providing better facilities, coaches, health physios and all other necessities which other sports athletes get as getting a medal for country needs proper support.”

The Esports Federation of India (ESFI) will be conducting the National Esports Championships 2022 (NESC2022), under the AESF Road to Asian Games program, starting from April 18 to select the Indian esports contingent for the upcoming Asian Games.

Popular games DOTA 2, Hearthstone, FIFA22, Street Fighter V and League of Legends will be part of the national championships as professional esports athletes as well as enthusiasts from across the country can register themselves and it is open for all with no restriction on gender. The tournament will be conducted over a period of 15 to 20 days.

Owing to the Covid-19 pandemic, the national qualifiers will be held virtually with top athletes from across the country competing and showcasing their skills and strategies. 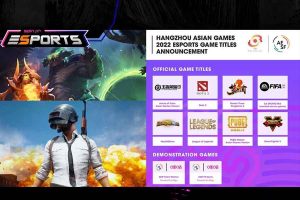 Talking about the announcement, Vinod Tiwari, President, Esports Federation of India & Director, Olympic Council of Asia – NOC & International Relations, said, “Finally the time has come for which the whole Indian esports ecosystem was waiting for. We are extremely thrilled and excited to announce NESC 2022 i.e. the national qualifiers to select the Indian esports contingent for the upcoming Asian Games 2022. It is a matter of pride for our esports athletes to not only showcase their talent and skills but also make the country proud by winning the laurels for the nation.”

Also Read: “Gaming is one of the primary focus areas for Infinix now”

“We urge all esports athletes to participate in large numbers and become a part of this historical event where esports is making its debut as a medal event in Asian Games. As esports is now included in Commonwealth Championships, IESF World Championships and expected to be included in Olympics in the near future, we are committed to develop, support and grow the esports ecosystem in India,” added Lokesh Suji, Director ESFI & VP-Asian Esports Federation.

Sebastian Lau, Director General, Asian Esports Federation, also extended his best wishes for the Indian esports talents: “I would like to share my sincere congratulations to ESFI team on the launch of their Registration Program for the AESF RDAG – National Team Selection Program the NESC 2022. This is an incredible beginning and milestone for India’s esports program and I look forward to seeing the best Indian esports talents in our RDAG Regionals and Final in Hangzhou this September. I wish the best of luck to all participants.”