Smartphone with camera or camera with a smartphone that is the question!

Nowadays, not just smartphones are evolving, the camera technologies present in smartphones are also evolving massively. Gone are the days when we used to travel with heavy cameras separately for photography. Smartphone brands are working to be on top of their game.

And if we talk about Vivo, the company throws out the word professional for its smartphone’s photography skills. Clearly because of its partnership with Zeiss. The Chinese smartphone maker recently launched its all-new Vivo X60 series, and as mentioned – it partnered with Zeiss to co-engineer the imaging system in the X60 devices.

The company is clearly betting big on this one, so we tested the device, and to know more let us check out the review!

This was my first time reviewing a Vivo device, so I went in with a clean slate. And from the first look, it is hard not to like the Vivo X60 Pro. From the design standpoint, it looks fresh and stylish at the same point. This device standouts with its four camera lenses at the back with a prominent logo of Zeiss.

The Vivo X60 Pro comes with a 6.56-inch Super AMOLED display, and it is nice to look at. Its modest 2376 x 1080 resolution is something of a surprise for a flagship at this point, but it’s one of the corners Vivo cut to accommodate the 120Hz refresh rate. By default, it is set to “Smart Switch,” which dynamically switches between 120Hz and 60Hz, which is according to the company is a feature to partly save the battery life.

In terms of design the company has not changed much, it looks very similar to the Vivo X50 series, and you get the same minimal frosted glass back design which is less prone to fingerprints. The back also has the same two-step camera module. However, the number of sensors has changed. 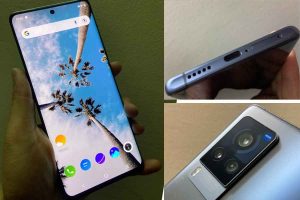 Vivo X60 Pro comes with an aesthetic design that is further complemented by its sleekness and lightweight. The dice comes with a 7.599mm thickness and is 177 grams of weight, which is quite lightweight and very easy to hold, and above all its curved edges feel better in hands.

Although, Vivo could have made some changes in the rear panel because almost all the previous mid-range smartphones launched by the company sport a very similar design. But having said that it is still a very good-looking smartphone.

The screen of the device is Full HD+, sharp, and offers colors that will please your eyes. The screen is also HDR10+ certified and offers vibrant colors with enhanced contrast for a better viewing experience.

What makes the viewing experience even better is that almost bezel-less design. It curves slightly along the sides to offer a bezel-less look. Apart from the curved sides, the X60 Pro has a very thin top and chin bezel. The top bezel is a mere 1.75mm thick, whereas the bottom bezel is only 2.76mm. Vivo x60 Pro offers a 92.7 percent screen-to-body ratio, which is among the highest in its price range.

The Vivo X0 Pro does not sport a dual-speaker setup which is a disappointment, since they are asking a lot of money, and there is no 3.5mm headphone jack either. But otherwise, the speaker grille on the bottom gives you a good sound.

The Vivo X60 Pro comes with Snapdragon 870 SoC, which is enough for a good lag-free and smooth performance. The RAM management is also quite good. 12GB of RAM is more than enough to keep your apps running in the background, and multitask at the same time, without any lag, the smartphone hardly gave us any glitch in the performance. There is also a Virtual RAM feature that offers an additional 3GB of RAM. It utilizes the phone’s 256GB internal storage when the system needs more buffer memory.

The device also offered a decent battery life, we used the device for almost a day on a single charge in which 2 hours of gaming and 2 hours of Netflix plus endless ranting on social media. On days when there was relatively less usage, the 4,200 mAh battery lasted for long hours on a single charge. You get a 33W fast charger in the box to refuel the cell. It usually takes 40 to 50 minutes to charge the device using the proprietary charging tech.

If we talk about the software, the X60 Pro runs on Android 11-based Funtouch OS 11 out of the box. Vivo has incorporated a few gestures and custom features on top of Android 11 features that Google offers. The phone also comes pre-loaded with a few third-party apps like Moj, Flipkart, etc. You can choose to uninstall these apps.

Let’s talk about the ‘Professional’ Camera!

As we mentioned at the starting of the article the company is betting big on the X60 Series camera capabilities, especially after its partnership with Zeiss. The triple camera setup of Vivo X60 Pro comes with a 48MP Sony IMX598 sensor, a 13MP ultrawide lens, and a 13MP portrait lens. On the contrary the Chinese variant of the X50 Pro there was an 8MP periscope lens that is missing in this device.

The primary camera clicks detailed shots in daylight. You get true-to-life colors, except for the Red and Orange that are slightly oversaturated at times. The dynamic range is among the best that we have seen on a smartphone’s camera. A lot of the credit also goes to the camera’s software algorithm. It also doubles up as a macro camera when you go very close to the subject. 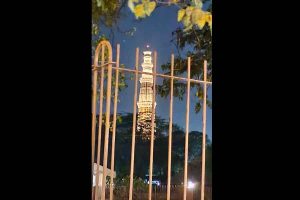 In low light, the camera performs exceptionally well. There were times when we did not feel the need to use the dedicated night mode as the normal ‘Photo’ mode got the best details. It exposes the shadows well without overblowing the highlights. The camera’s AI Scene Detection feature did mess up with the exposure sometimes and we decided to simply disable it. 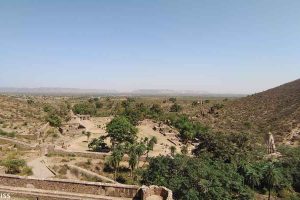 The ultrawide shots showed a slight difference in color temperature. We hope a software update fixes the warm color tone. The camera app offers a lot of features. It comes with an improved 5-axis Gimbal Stabilisation 2.0 and Pixel Shift imaging technology. You can use the ‘Ultra Stabilisation’ mode to record videos when on the move. The tech underneath, combined with the software, manages to offer decent stabilization when you are clicking hand-held photos and videos.

But overall the camera performance is quite fancy, no wonder the company is hyping it so much!

Now the question is should you consider buying the Vivo X60 Pro? Well, it is totally up to you but you do have to consider that the company is really on top of its game.

The Vivo X60 Pro comes at the price of Rs 49,999, and it is packed with some major performance improvements over its predecessor and packs a Snapdragon 870 SoC. If you want the ultimate flagship performance, there is the Vivo X60 Pro+, which packs the Snapdragon 888 SoC.

And now if we talk about the camera performance, then the smartphone is ‘the one’ for a shutterbug in you. While last year’s X50 Pro inched towards optical excellence, the partnership with Zeiss has helped the Vivo X60 Pro leap further. Whether you buy the Vivo X60 Pro for its best-in-class, feature-rich camera or the boosted performance and elegant design, it is a win-win situation.

However, there are other smartphones in the same price category that offers you some promising hardware. But having said that the Vivo X60 Pro is something worth considering.

Samsung has recently added a new edition to its...
Read more

With the creation of its neural processing unit MariSilicon...

Thinking of premium coffee, Starbucks comes out first. The...