MediaTek led with 81 smartphone models launched on their chipset against Qualcomm which saw 51 launches in India. Realme, Samsung and Motorola had three chipset suppliers for the smartphones launched in 2021, as per the report

There’s an increasing preference of handset makers towards opting for multiple chipset suppliers for their smartphone portfolio, revealed an analysis by market research firm Techarc, which is based on the smartphone model launches in 2021. 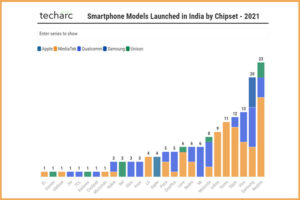 The chipset landscape is changing fast as we see OEMs (Original Equipment Manufacturers) now becoming a competition to the fabless chipset makers. “Though in 2021 the trend just started to emerge with no major impact on the market, in 2022 and beyond OEMs are likely to strengthen their own chipset roadmaps reducing dependability on the SoC makers,” noted Rawat.

“While this gives OEMs better control on creating differentiation right at the core of the product, the opportunity for chipset makers especially in premium and flagship products is likely to squeeze as these OEMs are introducing them with proprietary chipsets,” he added.

After Apple, Samsung and Huawei, Google and Oppo have already unveiled their chipsets.  Vivo also announced its first ISP (Image Signal Processor) in 2021. Among the fabless chipset makers, this is likely to have a bigger impact on Qualcomm as its chipsets are used by leading OEMs for their premium and flagship models. At the same time, MediaTek would also see some impact on its Dimensity family which has started penetrating in the premium category of smartphones, as per the report. 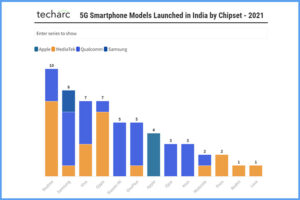 Though in terms of overall launches, MediaTek led for the year, 5G smartphone launches were done by the OEMs using a Qualcomm chipset.

However, as 5G smartphone launches are taking place at multiple tiers of the market, in 2022 it will be a close competition between Qualcomm and MediaTek to steal the maximum 5G smartphone deals.

Realme led the industry with 23 smartphone model launches in 2021, followed by Samsung and Vivo with 20 and 13 launches respectively. Transsion-owned Tecno and Infinix made aggressive pitch with 11 and 9 launches for the year with Tecno emerging in top 5 smartphone makers by launches for the period.

OnePlus which had been with Qualcomm since beginning, launched its first smartphone on MediaTek chipset joining other key OEMs with multiple chipset supplier trend.

In 5G smartphone portfolio as well, Realme led with 10 launches followed by Samsung with 8 launches. Vivo and Oppo had 7 launches each sharing the third place.

In 5G portfolio Xiaomi, iQoo and Asus stayed with Qualcomm as the single chipset supplier and Poco, Redmi and Lava opted MediaTek for their 5G launches. 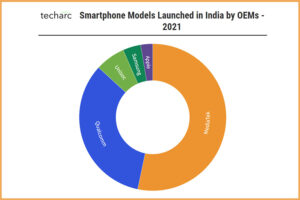 Qualcomm’s Snapdragon 888 was chosen by OEMs for 13 smartphone model launches making it the most preferred 5G chipset while within MediaTek Dimensity 800U saw maximum of 6 smartphone launches.

In terms of 5G chipsets, 7 chipsets each of MediaTek and Qualcomm were used for smartphone launches.

In luxe segment (Rs 50,000 and above), Qualcomm, Apple and Samsung chipsets were used for launching smartphone models. As Google Pixel 6 wasn’t launched in India, we did not see its chipset foraying the segment in India.

In the premium segment (Rs 25,000-50,000), Qualcomm saw 19 smartphones launched on various Snapdragon chipsets against 13 models launched in MediaTek chipsets in the segment.

Entry level chipset provider Unisoc saw 2 out of 6 smartphones launched in the entry segment (up to Rs 6,000) for 2021.

Also Read: “India is a key focus region for MediaTek”