Homegrown connected lifestyle brand Noise has come up with its latest campaign – #ListenToTheNoiseWithin starring Bollywood actor Taapsee Pannu. Recently, she was signed as Noise’s brand ambassador for the smart wearable category. With this, the brand endeavors to inspire Noisemakers to never give up and face the challenges as they come by listening to their inner voice and instincts. As part of the digital campaign, Noise has released an aspirational video that is live across Noise’s social media channels – Facebook, Twitter, and Instagram.

The narrative of the newly-launched campaign is pivoted on Noise’s core belief in listening to the noise within and belief in oneself – dil ka shor which completely resonates with Taapsee Pannu’s professional journey. This campaign is aimed at encouraging today’s youth and millennials to have belief in their abilities without getting impacted by daunting opinions and the “Shor” outside. The recently released 10 seconds video demonstrates the inspiring story of Taapsee who followed her inner voice to overcome her struggles and emerge as an independent, self-made actor. The actor is seen following an indomitable spirit for fitness which led to her new transformational avatar and wearing Noise’s smartwatch. Her voiceover narrates the antagonistic opinions of people who were directed to discourage her but, she suppressed these notions/voices to #ListenToTheNoiseWithin. Taapsee has shared the video on her social media accounts. 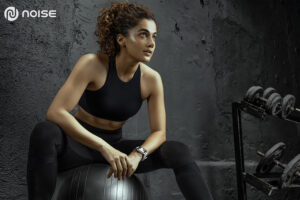 Amit Khatri, Co-founder Noise, said, “We are immensely elated to launch our first campaign with Ms. Taapsee Pannu. She has a one of its kind, high-spirited and fierce persona, which resonates with the core beliefs of Noise. Our synergies are harmonized when it comes to stifling the clouding voices and taking over the challenges to be better than ever. With our campaign featuring Taapsee, our core motive is to inspire Noisemakers that obstructions can never stop you if you listen to your instincts and follow your heart even if you are surrounded by several repulsive voices. We have always advocated the importance of listening to your ‘dil ka shor’ and to do so Taapsee.”

Taapsee Pannu said, “Time and again, people tried dragging me down or diminishing me with their criticism, but I made sure I neglected the dispiriting comments. The biggest learning of my journey has been to believe in myself and never lose touch with the inner Noise. Our instinct is the greatest driving force when we come across any challenge, and Noise echoes the power of listening to the inner Noise for a better version of yourself. Both of us are Ziddi and that is why the connection fits. I am glad to be a part of the campaign. The video is a brief glimpse of my journey.”

As a part of the campaign, Noise will be releasing series of videos with Taapsee Pannu featuring different products from Noise’s wearable portfolio. Noise has been catering to the growing demands of wearable devices in India and has emerged as the market leader in the category. The brand is geared up with the exciting campaigns and launches in the next few months.