Homegrown audio and wearable brand Fire-Boltt has brought on-board popular Bollywood actor Vicky Kaushal to launch yet another and one-of-its-kind smartwatch in the Indian market. The brand has unveiled Fire-Boltt 360, a smartwatch with a rotating menu and over 2,000 in-built games, at an introductory price of just Rs 3,499.

The Fire-Boltt 360 smartwatch is equipped with an SpO2 monitor, which provides a real-time tab on one’s blood oxygen level. This is in addition to a 24×7 heart rate monitor and blood pressure tracker. Heavy on specs and features, the smartwatch also comes with a meditative breathing feature that would guide the users to indulge in breathing exercises. Besides the health-related matrix, the smartwatch boasts of a rotating UI interface, wherein one can toggle between modes, folders and apps with utmost ease. 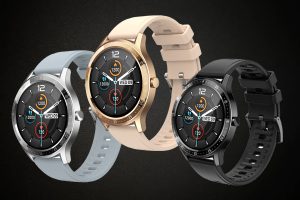 “Fire-Boltt 360 is a perfect companion for young India to track health parameters on the go and also to keep themselves entertained with the in-built games. It gives me pleasure to join hands with a homegrown brand that is about prioritising health with the help of technology,” said Vicky Kaushal.

“The reason why we chose Vicky Kaushal to promote our latest smartwatch is that he is an inspirational, visionary, charismatic, rebellious and freedom-seeking personality and every young Indian connects with him at different levels. He is our brand ethos of energy and action personified, and there could be no better occasion to bring him onboard other than the launch of our one-of-its-kind smartwatch 360,” said Arnav Kishore and Aayushi Kishore, co-founders of Fire-Boltt.

The Fire-Boltt 360 comes with a high-definition large screen, durable metal body and looks classic, elegant and sporty. The smartwatch is equipped with a robust battery, which lasts up to at least 8 days following a full charge even when used incessantly. It comes with a full power standby that retains power for a whopping 20 days. Also, there are multiple watch faces and sports modes to choose from.