Bollywood heartthrob Tiger Shroff is all set to don a new hat as the brand ambassador for India’s first-ever franchise-based Esports Premier League, which kicks off today powered by Infinix smartphone brand as the presenting sponsor.

While esports has seen an exponential rise especially during the lockdown, this league is the first of its kind to partner with Bollywood to bring wider popularity and acceptance to esports. This collaboration aims to nurture an ecosystem that the Indian esports industry has never seen before. The league will leverage Tiger’s popularity and strong influence on the millennials and Gen-Z.

“I am really excited to collaborate with Esports Premier League. This opens a tremendous opportunity to recognize the growing talent in esports in India. As the world’s first franchise-based model in esports, the ESPL will surely help in putting India first on the global map. Esports fans and gamers are shaping the future of entertainment and sports. And I’m glad to represent this force of the future,” said Tiger Shroff. 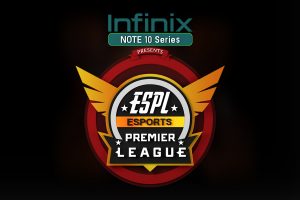 With the majority of the 1.4 billion Indian population being youth, the Bollywood sensation also known for his passion for sports and mixed martial arts will connect esports to the mainstream as the inaugural edition of the league promises to bring the excitement of esports through its nationwide tournament with lakhs of registrations that will commence from today. The preliminary rounds will engage in a highly competitive contest as eight teams will be chosen in the third round who will go on to contest in the grand finale.

“One of the major goals for ESPL has been to reach out to every millennial and gamer in the country and our purpose of having Tiger Shroff onboard has been to create a much deeper connect and grow the gaming community. We hope this association will also further our initiative to intensify the mission of taking esports to the next level in India,” said Vishwalok Nath, Director, ESPL.

As part of the franchise-based league, the Hyderabad team has been bought by Chequered Flag Sports – a consortium between Sirish Kumar, Prasad Mangipudi and Aashwij Ravula – and the team has been named as Hyderabad Hydras. Hyderabad is the first city that will witness the proud owners in the inaugural edition of ESPL. There will be more teams representing cities including Delhi, Mumbai, Chennai, Kolkata, Bengaluru, and states like Punjab, and Rajasthan in the upcoming league. India Today Gaming has teamed up with Garena to create this exclusive gaming platform featuring their most popular battle royale game, Free Fire, in India.

The matches will be streamed on OTT giant Disney+ Hotstar alongside official YouTube and Facebook channels of India Today and Aaj Tak and its websites. Due to the COVID-19 pandemic, the Season 1 will be held virtually over two and a half months. It will also feature a prize pool worth Rs 25 lakhs where the winner takes home a sum of Rs 12 lakhs while second and third-placed teams will take home Rs 6 lakhs and Rs 3 lakhs respectively.