Just In
Home /5G trials: What do experts say on health hazard concerns

The trial runs of the fifth-generation of wireless networks for mobile broadband, commonly known as 5G, have started in India, promising benefits of ultra-fast connectivity and low-latency. However, 5G and its rollout have sparked a debate in India over the fears on health concerns. There are even some conspiracy theories which have tried to link it up with the coronavirus among other things.

A private television channel recently conducted a debate over the impact of 5G and the health hazard concerns associated with it. The panel of experts discussed various aspects of the 5G trials in India. 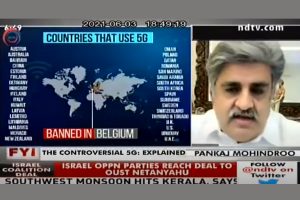 Pankaj Mohindroo, Chairman, India Cellular and Electronics Association (ICEA) termed the rumours of health hazards due to 5G trials irrelevant. To back his point, Mohindroo said that India has 10 times stringent norms for radiation as compared to the norms in other countries. He further explained that the world follows the norm of 2 watts of radiation on 10 grams of tissues while in India it is 1.6 watts on 1 gram of tissue. These norms are only followed in three other countries, USA, South Korea and Canada.

Mohindroo further said that the radiation emitted from the cell phones are non-ionizing which only marginally increases the temperature and doesn’t change the cell structure. He added that the effects of non-ionizing radiation can be referred to from a study by International Agency for Research on Cancer.

Dr Harsh Mahajan, a famous radiologist, said that there is no known evidence of the health hazards from radiation emitted from cell phones and the towers, but “we still need to reduce the usage time of cell phones”.

Sanjay Kapoor, former CEO, Bharti Airtel, said that same charges were levelled by the activists at the time of the trials of 2G and 3G services in India, however, “we are yet to find any credible evidence against the radiations emitted from these”.

Aashutosh Srivastava, a Supreme Court advocate and Juhi Chawla’s counsel in this case, referred to the study by International Agency for Research on Cancer in 2011, which mentions carcinogenic radiation as cause of cancer. Srivastava said that “we need to study the effects of these radiations in much more detail before proceeding with the 5G trials”. Srivastava was however confronted by Pankaj Mohindroo during the debate who listed out the categories mentioned in the study and said that the study nowhere mentions the radiations from cell phones or towers as cause of cancer.

What WHO says on 5G trials

World Health Organisation (WHO) on the impact of 5G on health, says that so far only a few studies have been carried out at the frequencies to be used by 5G. It adds that tissue heating is the main mechanism of interaction between radiofrequency fields and the human body and radiofrequency exposure levels from current technologies result in negligible temperature rise in the human body.

Also, as the frequency increases, the WHO says that there is less penetration into the body tissues and absorption of the energy becomes more confined to the surface of the body. And since the overall exposure remains below international guidelines, no consequences for public health are anticipated, it adds.

What is 5G technology and when will it roll out in India?

The fifth-generation of wireless networks or 5G promises to revolutionise mobile broadband and it is an upgradation of technology over the existing 4G. This new technology will not only ensure faster internet speed in our phones, but also help power IoT (Internet of Things) networks to run connected cars and homes smarter. It will also support streaming of rich media.

But 5G is yet to be rolled out in India. Telecom companies Bharti Airtel, Reliance Jio and Vodafone Idea have been given trial spectrum to test 5G technology in the country. Once the trial is over, the 5G rollout is expected to gather pace in the country by 2022.